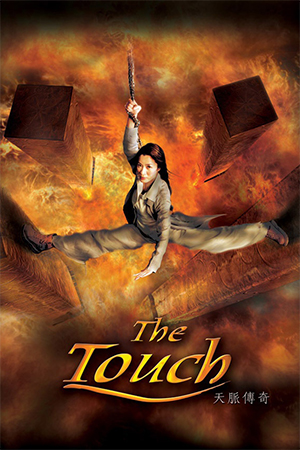 The hype surrounding this film during pre-production was significant enough to stir a definite feeling of anticipation in me. Michelle Yeoh had always been an actress who was electric on the screen and had starred in a number of films that still stand out as classics to this day. Meanwhile, she was to be supported by two actors who have proved themselves in a number of big-budget Hollywood productions. The icing on the cake was that Peter Pau – the cinematographer par excellence – was at the helm and was bound to bring his resplendent visual style to the screen. Unfortunately, reviews on the films release were far from flattering; despite reasonable box-office results in Hong Kong, the critical community were far from happy with the finished article and words like ‘disaster’ were freely being bandied about. This backlash was the main reason for the sudden splash of cold water on my enthusiasm, though now I’ve finally plucked up the bravery to watch it.

Circus acrobat Yin (Yeoh) is close to her performing family and, as a well-loved team, they travel throughout China demonstrating their extraordinary abilities. On the eve of her brother’s birthday, Yin is shocked to see the return of Eric (Chaplin) – the adopted ‘son’ of her late father who, after training with the team, left them to seek his fortune. This quest for fortune is focused on using his acrobatic training for criminal purposes, stealing valuable artefacts to order for his pompous boss Karl (Roxburgh). Eric’s return is not welcomed by Yin and her family, but his own dubious dealings mean that they are soon in the middle of the action. Yin learns that Eric has stolen a heart-shaped jade medallion from his ’employer’ – an artefact that supposedly unlocks the secrets of the legend of the Sharira – who naturally wants it back. When Karl sends his minions out to get the medallion back, the only succeed in capturing Eric and Yin manages to keep hold of the valuable object; she then rescues Eric and decides that perhaps it is time that she begins to believe in the legend of the Sharira, a story she had been told by her father years before. Karl will not be thwarted though and manages to kidnap Yin’s younger brother and use his knowledge of the Sharira for his own quest. With her brother now involved, Yin agrees to travel with Eric and uncover the legend of the Sharira while also rescuing her naive brother.

I really wanted to like ‘The Touch’, I really tried to stop any of the criticisms I’d heard from affecting my judgement. Despite my intentions, ‘The Touch’ is a turgid production that fails to make any real use of an obviously enlarged production budget. Having said that, it still proved to be SLIGHTLY more enjoyable than expected and there were odd moments that indicated that all might not have been lost. As the cons outweigh the pros, it’s worth mentioning the better aspects first. Peter Pau’s eye for stunning visuals and beautifully constructed frames is retained in ‘The Touch’ and, with the unusual landscapes that feature heavily in the film, he relishes using them to the full extent. His use of ambient lighting and gentle atmospheric touches are trademarks that Peter Pau happily utilises. In Michelle Yeoh he also has a leading lady who has a history of combining the roles of the feminine lead and action star effortlessly while Ben Chaplin and Richard Roxburgh are quite impressive names in the supporting cast.

However, ‘The Touch’ is sunk by some major mistakes on the part of Peter Pau and the rest of his production team. The initial problem is perhaps the storyline. The ‘Indiana Jones-esque’ story has been seen countless times before; with such a well-used formula, ‘The Touch’ needs to be special enough to side-step this stumbling block and, sadly, it simply isn’t. The elements that compose the film have been seen too often before and usually presented much better than they are here. As director, Pau also struggles with the tone of the film – he cannot decide how to paint the villains, this being also hindered by poorly drawn characters. While Karl is, at times, quite a cruel villain, his sub-ordinates verge on being slapstick figures, presenting all the menace of Ben Stiller. The biggest fault of the film, though, is the computer effects that prove to be a major part of the production. Simply put, they range from the below-average to the dreadful. From Yeoh’s poorly animated scarf to the painfully awkward-looking finale, ‘The Touch’s attempts to integrate the effects with the actors looks as realistic as ‘Tron’. Whatever hope there was of creating excitement is utterly diminished by the CGI.

It gives me no pleasure at all to give ‘The Touch’ 2 1/2 stars. A big-budget mess that occasionally makes good use of its actors, this is a movie that has few strengths to rely on. The fact that ‘Magnificent Warriors’ – Yeoh’s much more successful action-adventure outing – was made for a fraction of ‘The Touch’s budget says everything about Pau’s finished article.