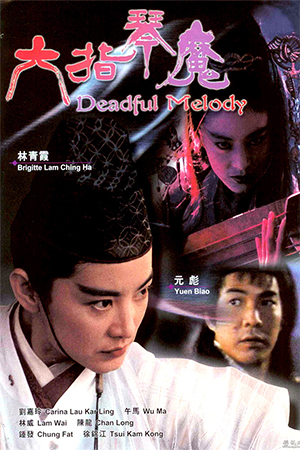 Released during the nineties when fantasy wuxia was enjoying a lot of popularity, ‘Deadful Melody’ may not be as well known or as enjoyable as say the likes of ‘A Chinese Ghost Story’ or ‘Swordsman 2’  (arguably two of the best 90s fantasy wuxia) but it is still a slick, frenetic and entertaining example of the genre.  Brigitte Lin (‘Fire Dragon’, ‘Ashes of Time’) is Snow, an expert assassin who possesses the deadly lyre: a musical instrument which when played can cause mass destruction and death. Naturally it’s a much sought after weapon with the six ruling clans wanting to get their grubby mitts on it. Putting their differences aside, the clans’ joins forces to better capture Snow and the mystical lyre. However, Snow has other plans: placing the lyre in the hands of Lui Lun (Yuen Biao) in order to flush the clans out so she can take revenge on them for killing her family.

Directed by one time stunt coordinator Ng Min-Kan (‘Heart of Dragon’) and with action co-orchestrated by Mang Hoi (‘No Retreat No Surrender 2’, ‘The Blade’), ‘Deadful Melody’ features a ton of over-the-top action and highflying spectacle making it a breezy 90 mins of fantasy action fun. With some kinetic camera and editing work, not to mention wirework, the film rarely sits still as it tells its fairly simple story at breakneck pace with nary a pause in between all the highflying theatrics. The impressive production values and colourful visual palette help to gloss over the simplistic story and the somewhat histrionic acting showing that you really didn’t (and don’t) need dodgy CGI to showcase larger than life fight scenes and fantasy action.

While everything in ‘Deadful Melody’ is exaggerated to the limit (even for a fantasy wuxia flick) it’s certainly inventive with the confrontations between certain characters increasing in creativity, ludicrousness and excessive explosions as the film progresses. The action is certainly all flight-of-fancy stuff utilizing all kinds of styles, weapons and explosive techniques. Not least when the lyre is put into action causing everything to explode in a colourful array of bright hues. Biao unfortunately doesn’t get to cut loose as much as one may like, as this is much more zipping about on wires and sword based style action than intricate bootwork and hand-to-hand combat. However, he still displays his amazing acrobatic skills on occasion and is always a likeable presence on screen.

If you like your early 90s wuxia flicks full of excessive theatrical action and characters then ‘Deadful Melody’ is a lot of fun. Brigitte Lin is as cool as always and there is some fun support from the likes of Wu Ma (as the impossibly red coloured Fire Master!) making ‘Deadful Melody’ an underrated treat for the fan of Hong Kong fantasy action.