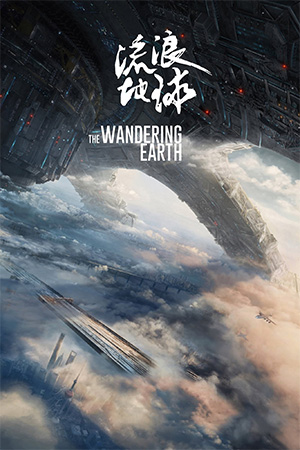 Hard sci-fi, disaster movie, megastar Wu Jing and family melodrama (ugh) collide in the ambitious and huge scaled ‘The Wandering Earth’. Based on Liu Cixin’s novel, ‘The Wandering Earth’ sees the sun dying out and the earth building gigantic engines, all over the planet, to effectively move it to a new solar system and out of the sun’s engulfing path. One of the lead scientists on this mission is Liu Peiqiang (Jing), who engineers the earth’s voyage from a giant space station. Having left a son on earth behind many years ago, Liu may soon get the chance to reconnect with him when his son and several other plucky would-be-heroes are drafted in to help make sure the earth stays on its course as the elements and the risk of the massive undertaking threaten to pull the planet apart.

‘The Wandering Earth’ is a massive film with massive spectacle. From set-design, to visual effects to set-pieces the film does not skimp on scale. Despite a rushed prologue setting up what is going on and the issues Liu and his son have, the filmmakers have still created an incredible futuristic and lived in world with a combination of slick CGI and colossal sets. Everything about ‘The Wandering Earth’ is big which is not surprising when the plot hinges on moving the entire earth to a completely new solar system. Like any good disaster/epic sci-fi movie, ‘The Wandering Earth’ does not skimp on daring-do and spectacle. The unique look and situation the characters find themselves in leads to all kinds of earth and space bound catastrophe and action including a daring ascent up an elevator shaft and some high-flying hi-jinks on the outside of a space station. With the budget and resources on hand, Frant Gwo’s film always looks amazing and the set-pieces are copious and exhilarating.

Yet, also much like any good disaster/epic sci-fi movie, the film comes with its fair share of cheesy, annoying and thinly written characters. Coupled with the unnecessary family strife, ‘The Wandering Earth’ does get clogged with cliché and melodrama on occasion. With so much spectacle and so many characters to fit in, the film also suffers from a lack of tension as proceedings sometimes appear to be rushed, trying to cram in as much epic story as possible. This doesn’t dampen the spectacle or creativity on show but does mean the sense of danger is quite often missing. Wu Jing is also more of a co-star here (drafted in for star power) meaning he sits on the sidelines somewhat while the cast of plucky young heroes handle most of the heavy lifting.

Still, as a large scale sci-fi epic ‘The Wandering Earth’ largely succeeds in delivering stunning set-piece cinema. As there is so much CGI utilized is does vary in quality but overall succeeds in creating a crumbling futuristic world and is certainly needed to tell a story on this scale. While the Chinese film industry is more than capable of delivering the big budget martial arts fantasy or the large scale military action blockbuster, it’s good to see them now tackle the sci-fi disaster epic.