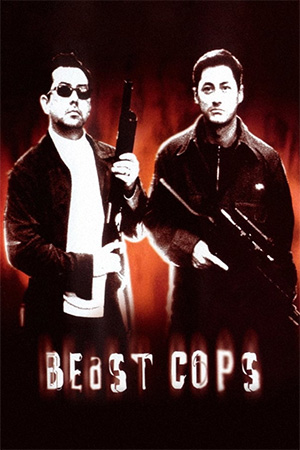 Hong Kong has deteriorated into a sorry state, gangsters rule the streets and clubs with the cops powerless to put a stop to the blatant disregard for the law.  Tung (Anthony Wong) is a policeman who has grown up in the company of Triads and interlocks between the two sides to please his own needs.  When he is assigned a new boss, Mike (Michael Wong), it looks like little will change until Mike becomes involved with one of the Big Brother’s girlfriends.  Torn between the right thing to do and keeping the peace, Tung must finally face up to performing the job he is paid for before all hell breaks loose.

Those looking for an action film from ‘Beast Cops’ should really look elsewhere.  Despite its gritty police thriller look, this film is more about the people involved in the story than the physical altercations along the way.  It sets out to show the thin line between the law and the criminal lifestyle as each have become interwoven with Policemen sitting side by side with Triad bosses with little respect between the two.

Anthony Wong is always a solid actor and here he takes the starring role as a cop caught between the two sides, unsure as to where his loyalties lie.  He has a lust for the ladies with money as his one true driving force but the good thing about him is that he does come across as an ‘everyday’ type man with whom most people can relate.  Michael Wong, despite his strong build and introduction as a cop on the edge, has little action to partake in and sadly his acting is as wooden as ever.  His character has very little depth (but whether this is due to his poor dialogue delivery or the script is unknown) and comes across as slightly unbelievable with no ambition or set of morals in his life.   Sam Lee rounds off the trio as the comic relief and only pops up to lighten the mood at certain intervals.

The film is really split into two halves with the first being shot like a documentary (with characters speaking into the camera etc.) and the second taking a sharp turn into a blood crazed finale.  Apparently this is mostly due to the inclusion of two directors to create this production.  Gordon Chan, best known for films like the ‘Option’ series, steers the opening into relationship territory but when Dante Lam takes over he goes all out to show how dangerous the underworld can be.  This does seem to be a successful mix as it’s something of a shock to see such a climactic ending to what is a fairly slow moving drama.

‘Beast Cops’ is a powerfully shot and highly entertaining movie that raises some important issues regarding today’s society, which really need to be addressed.  The one complaint would have to be that most of the points concerning the question of right and wrong are barely resolved, with the exception of a minor switch in the balance of power (but perhaps this in itself is a a reflection of situations occurring in real life).  Highly recommended for its realistic approach but not one for explosion enthusiasts.