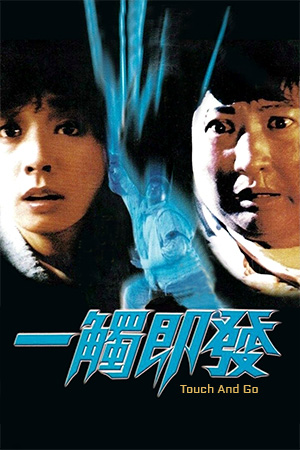 Fat Goose (Hung) is just your ordinary guy with a regular job and a conventional  lifestyle.  That is until he witnesses the murder of a cop which throws his life into disarray as he must now become a witness for the police.  In an idealistic world this would just be an open and shut case but when the suspect is released on bail due to his medical condition Goose finds himself abandoned by the police until the case goes to trial.  Of course, no good criminal will sit by and just let himself go to jail so now that he is free he sends his goons out to take care of Goose and silence him forever.  Luckily for Goose though, he has a few skills of his own when it comes to fighting and with the aid of one rogue cop, the two team up to take on the bad guys and keep justice on the streets of Hong Kong.

‘Touch And Go’ was released at a time when both director and main star were churning out some of their finest work. This particular entry into their filmographies however, is unlikely to leave a lasting impression.  It displays little of the spark that Lam and Hung were capable of and can only be considered average at best.  The story is a fairly routine action/thriller that plays out in a particularly uninspiring manner. Characters are lightweight and forgettable, and the film strangely seems to abandon several of the established sub-plots. Acting-wise, Sammo is probably the only member of the cast that actually shows any hint of emotion, but it has to be said that even he is far from his best.  Hell, even the action is fairly mundane and, aside from a couple of trademark Lam car chases and some routine Sammo fisticuffs, does little to warrant a recommendation.

It’s credit to both director and star that even when not at their best, they still manage to make ‘Touch And Go’ a watchable effort.  With two heavyweights of the industry combining though, you can’t help but see it as a missed opportunity which really should have been magical rather than just plain average.