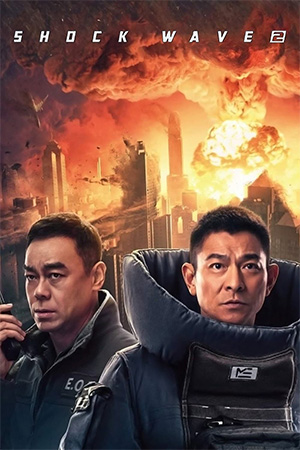 A sequel in name only to the Andy Lau starring ‘Shock Wave’, ‘Shock Wave 2’ ups the ante tenfold to deliver a bigger, brasher and bombier sequel.

Lau returns but plays a different character this time around. Still a bomb disposal expert, Lau is Poon Shing Fung who along with his partner Tung (Lau Ching-Wan) are blazing through Hong Kong diffusing all kinds of bomb situations. One goes sideways, and leaves Poon injured and missing a leg. Flash forward a few years later, a rehabilitated Poon is discovered unconscious at another bomb site where many have been killed. In custody and suffering memory loss, Poon is now a prime suspect in the bombing and the possible key to tracking down a terrorist unit called Vendetta, who plan to set off a nuclear bomb in Hong Kong airport. Poon must fight to regain his memory, reunite with old his partner, and remember what he has been doing in the years since he lost his leg and left the force if he is to help locate the nuclear bomb and save Hong Kong.

‘Shock Wave’ was a decent action blockbuster and star vehicle for the likeable Lau, but ‘Shock Wave 2’ take everything that worked in the first (explosions, action, disaster set-pieces) and amplifies it all by throwing in more explosions, more action, more danger plus a memory loss sub-plot that plays out anything but liner meaning one really must pay attention in order to keep up with what is going on in between all the destruction. Along with star Lau, director Herman Yau also returns and crafts a rocket-fuelled sequel that outdoes the original, surges with adrenaline and bomb blasts its way through its own ridiculous plot developments to deliver a rollicking good time.

Right out the gate, ‘Shock Wave 2’ starts as it means to go on with epic sequences of destruction that sees Hong Kong airport obliterated (a what if scenario if the terrorists were to succeed!) to then immediately segue into several taught and explosive set-pieces of Poon and crew disposing of bombs, to whisking through Poon’s rehab, to jumping years later where the terrorists are putting their plan of destruction into action which kicks off with an epic and well-staged shoot-out in a hospital. The first 45 minutes or so are so jet propelled, action soaked and bombastic it is hard to get a handle on what is actually going on. But damn if it ain’t fun.

All slickly shot and skilfully handled this opening gambit is pure action spectacle, Yau orchestrating impressive blockbuster thrills. Proceedings then slow down somewhat to let the plot kick in but in a far from linear fashion. Adding mystery to big action, means the film diverges into “what the hell is going on?” territory and that one has to pay attention if they are to get handle on what is happening and why. Amnesia, childhood friendships, romance rekindling, memory implants and terrorist plotting all get an airing and while it is confusing at first, Yau and crew keep a handle on it all (just!) through tight editing, pacing and committed performances meaning that no matter how ludicrous it all gets everything falls into place for the tension filled finale. The final third ramps up the action and crazy once again to end on a bang and rival the first third for spectacle overload.

One’s suspension of disbelief may be pushed to breaking point but if you can go with the adrenaline pulsing momentum and the fact this is supposed to be a load of entertaining fun, then you will have a good time. Lau is great, and charges through the film like ‘The Terminator’, the action superb and it’s all wrapped up in a slick load-of-money-thrown-at-it package meaning ‘Shock Wave 2’ delivers superior blockbuster entertainment.