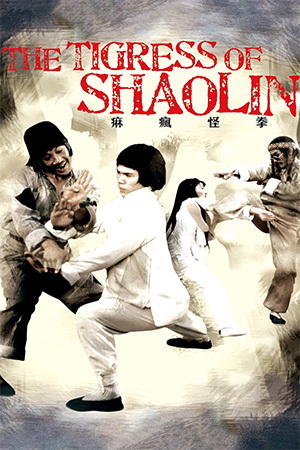 Kung fu enthusiast Tieh (Lau Kar-Yung) leaves his dying uncle to seek his fortune in the city. Pointed in the direction of his uncle’s former colleague, Tieh is given the chance to start working for his kung-fu school immediately. However, when Tieh finds out the illegal activities of his new employers, he makes a stand, an action that sees him nearly beaten to death and left on an isolated beach. Tieh’s life is saved by the timely intervention of a young woman (Kara Hui Ying-Hung), someone who he had initially met under very different circumstances. Despite past misunderstanding though, Tieh is taken back with the heroine and begins to learn kung-fu from her uncle and auntie. It isn’t long though until those who sought to kill him find out that he is still alive and determine to finish the job properly this time.

Director Law Kei has a somewhat unremarkable filmography. Having sat through ninety minutes of ‘The Tigress of Shaolin’, I can see why. Despite having all of the benefits of being made under the Shaw Brothers’ banner – solid production values and a notable cast – this is insipid film-making. The genre may not be associated with lucid plotting and strong character motivation, but ‘The Tigress of Shaolin’ is an especially lazy attempt to jump on the kung-fu comedy boom of the late 70s. As if the intentions of the director weren’t blindingly obvious, one character is even called ‘Drunken Master’ early on as if a nod to the Jackie Chan classic makes this successful by association.

Lau Kar-Yung, adopted brother of Lau Kar-Leung, has shown before that he can carry a film. His impudent charm and tidy fighting skills looked especially good in Fong Hak On’s ‘Gold Hunters’ and with the backing of Shaw Brothers’ stamp of quality, expectations should be high. Add the wonderful Hui Ying-Hung to the mix and this should have at least been a diverting genre movie. Instead, ‘The Tigress of Shaolin’ is an episodic mess where an assortment of appalling characters stumble from one scene to the next without any continuity. The hero manages to learn kung-fu from three different people in this while the villains are the most basically thrown- together characters imaginable.

When a kung-fu film lacks the skill of a good writer and a competent director, there might at least be hope in the form of the fight choreography. ‘The Tigress of Shaolin’ is especially disappointing here though and there isn’t a single encounter that is even slightly memorable. With the quality at Law Kei’s disposal, this is verging on the criminal. Yes, a few occasional moments entertain, almost despite the director’s intention. Yet for the most part, ‘The Tigress of Shaolin’ is a woeful, wasteful, wearisome ninety minutes of kung-fu cinema. And answers on a postcard to who the eponymous Tigress of Shaolin is!