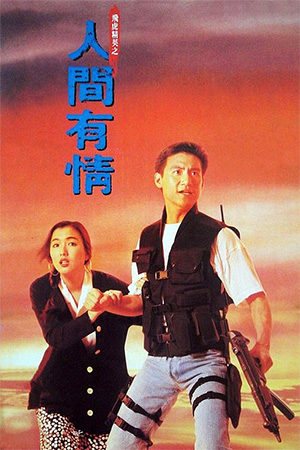 Not be confused with the Eric Roberts/Phillip Rhee tournament fight film of the same name, this ‘Best of the Best’ (or ‘The Best of Best’ as the MIA video release titles have it) is a fairly routine love-story-goes-to-hell-thanks-to-some-nasty-gangsters slice of nihilism from director Herman “The Untold Story” Yau. Jacky Cheung (‘Bullet in the Head’) is Li Man Kit a member of the SDU, a SWAT like team who also go by the name of the Flying Tigers. After saving the feisty and beautiful Heidi (Cheng) from a gang of brutal criminals, Li strikes up a romantic relationship with her, which her mob boss father (Chun) does not take too kindly too. Soon, Heidi’s father (and his gang of goons) is making life unpleasant for Li (including hassling Li’s own father, Ng Man-Tat) and it’s not long before violence erupts, blood is spilt and, well, everything pretty much goes to hell in a hand basket.

Fairly routine it may be in terms of narrative, ‘Best of the Best’ is still a fairly entertaining, if minor, entry in the early nineties heroic bloodshed genre. We get some romance, we get some violent gangsters, there’s a bit of gunplay and everything ends on a suitably downbeat note. Thanks to an engaging cast, a couple of hard hitting shoot-outs and the first big screen appearance of Hong Kong cutie Sammi Cheng, ‘Best of the Best’ is always engaging over its 90 or so minutes. The cast are uniformly good with Cheng proving sweet and sexy (if a little kooky: though to be fair I would probably have let her drive off with my red sports car too!) and has good chemistry with Jacky Cheung who has the moody/bad ass cop thing down pat. Ng Man-Tat (‘Fight Back to School’) is also very good as Li’s wayward but likeable dad, he receiving much of the trouble from Heidi’s evil father.

While there are several well staged and bloody squibbed shootouts, the film could have benefited from a bit more action.  The SDU/Flying Tigers aspect is all but sidelined to focus on the leads blossoming relationship making the film more of a drama with a few scenes of action and the odd bit of in-your-face violence. While not too extreme in terms of onscreen violence, there are still a couple of standout violent scenes that stop the film from descending excessively far into dreary drama territory: not least a nasty burn stunt and the WTF gas-canister-to-the-head moment!

As mentioned, ‘Best of the Best’ is nothing new to the genre (and if you are familiar with these types of films, you’ll know where proceedings are heading from the get go) but thanks to some solid acting, engaging characters and a little bit of gunplay action this isn’t a bad little romance-gone-bad/crime picture.