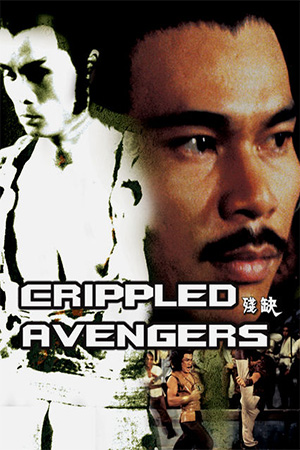 ‘Crippled Avengers’ is considered by many fans to be one of the most action-packed and outrageously entertaining Venoms outings. Helmed by the masterful Chang Cheh, the film is one of the few to make use of all of the Venoms, with the exception of Wai Pak, and also involves earlier stars Chen Kuan-Tai and the late, great Chiang Sheng. Aside from its unforgettable title though, does the film live up to its reputation?

In retaliation for an attack set up by the mentally disturbed Dao Tian Du (Chen Kuan-Tai), the ‘3 Tiannan Tigers’ (led by Dick Wei) storm his home to kill the guards and take advantage of his family. His wife dies in shock after having her legs chopped off. However, the boy survives but his arms are chopped off. Dao avenges their loss immediatelyand promises to get the best blacksmith to attach iron arms for his deformed son.

Years later, his son has grown up, and now has iron arms that have the capability to extend outwards in close quarters battle whilst his fingers can shoot out darts. In the town, it is unofficially known that Dao’s clan rule the town so no one dares to cross them. They also make it clear that if they are insulted in the slightest, the ‘offender’ will be tortured.

Sadly, 4 victims fall for this: Bystander Chen Shuen (Philip Kwok) is blinded, Blacksmith Wei Jia Jie (Lo Meng) is deaf and mute, an ex-worker (Sun Chien) is legless and fighter Wang Yi (Chiang Sheng) is brain damaged. Despite their disabilities though, they are taught to enhance their other senses to optimum level. The heroic group are then determined to take revenge on Dao Tian Du and rid the town of this fearful menace.

While it could easily be labelled as just another revenge story, ‘Crippled Avengers’ succeeds simply because it is packed full of classic clichés and astounding action. Some overly paranoid people may consider the concept to be a little non-PC in today’s society, but Chang Cheh never really dwells on the disabilities of the main characters and the underlying theme is essentially his typical tale of heroic justice.

As usual, each of the Venoms is given a very unique persona that allows the audience to associate with each of their predicaments. Out of all the characters, I would probably have to say that Philip Kwok’s is the most entertaining as he receives such a complicated character who is predominant in a lot of the main sequences. Lo Meng is also on top form though, with his headstrong personality allowing him to stand out and the fact that he has to play the majority of his role in silence makes his performance all the more impressive. Chiang Sheng and Sun Chien probably receive the least screen time here, but when they do appear they are always thoroughly entertaining and lighten the mood with the odd flash of humour and comedic chemistry.

In terms of action, this is probably one of the most acrobatic Venoms films as they participate in some extremely complicated routines that are brilliantly put together. The finale in particular, delivers a breathtaking fight as father and son take on all 4 of the main warriors. What follows is a superbly choreographed battle that provides a balletic display of acrobatic kung fu with numerous different techniques and a handful of intriguingly chosen weapons.

It would be hard and unfair for me to say which is the best Venoms movie as each of them has their own uniqueness with different values of martial arts and plot. No matter which you prefer though, ‘Crippled Avengers’ definitely sits near the top of the pile as nobody does it better than the poisons, and of course Master Chang Cheh!