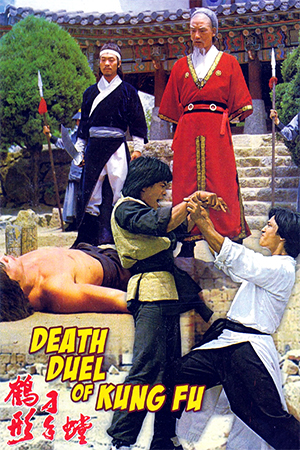 After Hsiun Chin Kwai (Wong Tao) kills a high ranking Manchu official, he flees across China to meet up with his fellow Ming patriots in Taiwan. To Ku Yun (Han Ying) is assigned to find Hsiun and kill him, not only for revenge but also to hurt the morale of the Ching’s soldiers, as he is considered one of the Ching’s greatest fighters. On his travels to Taiwan, Hsiun also encounters a Japanese, lady con-artist (Fanny Wang) who cares for him after he’s injured in a fight and Sun Shan (John Liu), a wandering kung fu fighter whose allegiance is unknown.

The above synopsis may make the story sound interesting, but unfortunately, it isn’t. There’s probably more plot detail in an average Tom and Jerry cartoon. There are ‘twists’ and an attempt at intrigue but everything is too obvious to generate any interest. The main double cross is given away so early and easily that no suspense can be derived from it. We’re shown the main villain, in several scenes, talking to a shadowy figure plotting Hsiun’s downfall. The fact that there are only really 4 main characters in the film means it doesn’t take a NASA engineer to work out who the ‘snake in the grass’ is. As with many low budget kung fu films the story ends up being there to link the many fight scenes together.

The acting isn’t likely to ‘wow’ you either. John Liu comes away from the film with the most credit in this department. This is due to his cocky, laid-back, wandering kung fu master being the most entertaining character in the film rather than Mr Liu’s dramatic skills shining through. Wong Tao brings no life to his earnest and in the end rather dull lead character, Fanny Wang smiles her way through the entire film (nice teeth) and Han Ying makes for a serviceable villain.

The only time any excitement is generated is during the action scenes. These fight scenes are all of a very high standard. Wong Tao fights with power and authority and John Liu is, as usual, a one-man kicking festival. Han Ying is certainly a match for the two stars and really shines in the final fight of the film. Everyone performs the excellent choreography with speed, precision and plenty of style. The many fights will leave any old school kung fu fan happy.

Thankfully, you’re never too far away from a spot of fisticuffs, which is a very good thing because you’re not likely to gain much enjoyment from any other part of this film. Worth a rental.