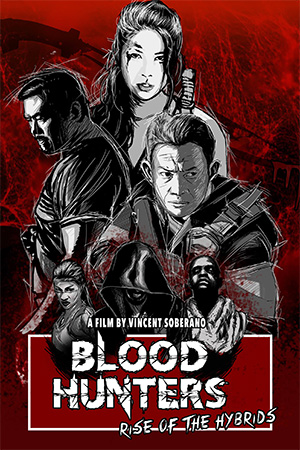 This short, sharp and mostly sweet martial arts vampire actioner may lack budget and a dense narrative but what it does have is oodles and oodles of awesome fight action. Set in a world populated with bloodthirsty Aswang (Filipino vampires), ‘Blood Hunters: Rise Of The Hybrids’ sees a rag-tag group of fighters and vampire hunters, who having all lost something or someone to the Aswang, team up to take down two of the top vampires: Gundra (Maekael Turner) and Naga (Temujim Shirzada). The two, along with their vampire army, are set to meet in a nearby forest for a sacrificial ceremony where the group of blood hunters plan to attack and destroy them once and for all.

And that’s ‘Blood Hunters’ in a nutshell: a group of fighters come together to takedown some vampires and what follows is 70 minutes of almost constant fight action. On its ambitious terms to deliver as much action, blood and vampires in the shortest time possible, ‘Blood Hunters’ delivers. There is some back story for the main characters via flashback where we see what Gundra and Naga took from them but the bulk of the short running time is taken up by the group attacking the vampire compound and kicking almighty ass. With character names such as Gundra, Naga, Bolo and Kali being thrown around as much as the fists, ‘Blood Hunters’ is very comic book in style. Director and star Vincent Soberano even injects proceedings with some cool comic book style panelling/graphics which serve as funky transitions (and seem to hint at a bigger story!) meaning ‘Blood Hunters’ is very much in the comic-book-vampire-action wheelhouse.

Sure, the small budget doesn’t always meet the ambitions of the filmmakers (though the flick is nicely lensed in the Filipino jungle) and the acting is often somewhat rough around the edges but it more than makes up for it with all the highly charged fight action. The cast appears to be made up of various screen-fighters and stunt people who’ve worked on the likes of ‘Wolf Warrior 2’, ‘The Trigonal’, ‘BuyBust’ (to name a few!) and all of them get to cut loose in a seemingly never-ending barrage of fights. However, leading lady Sarah Chang (‘Bleeding Steel’, ‘Wolf Warrior 2’) steals the film, making for a strong heroine and is an absolute dynamo in the fight scenes, which are (despite some distracting vampire-super-power-effects!) well shot and cut so one can see and appreciate all the nifty combinations and takedowns.

It may take itself a little too seriously, barely meets feature film running time and at times is as silly as it is cool but ‘Blood Hunters’ is a fun, fight packed fright flick that lets a cast of talented screen-fighters strut their stuff. It’s basically just one long action scene (meaning this reviewer loves it!) and with its want to deliver energetic comic-book-vampire-action, ‘Blood Hunters’ succeeds and is a hoot. The makers also set it up for a sequel: bring it!