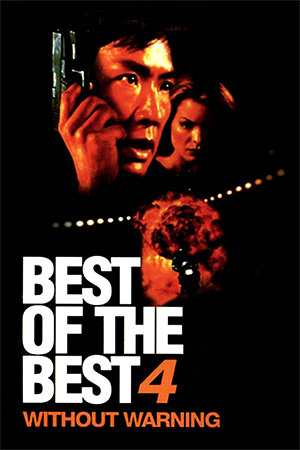 Having “obtained” the computer disk used by the U.S. Treasury to print money, a group of Russian mobsters hijack a truck containing blank currency paper to complete their master plan. However, the publicity surrounding this endeavour alerts one of their employees as to the gangster’s true intentions and she decides to steal the disk and make a run for it. Unfortunately, she doesn’t get very far and only just manages to slip the disk into an unsuspecting Tommy Lee’s (Rhee) pocket before she is gunned down. Of course, this now means Tommy becomes the object of the gangster’s furious pursuit and with rumours flying around about possible police involvement, he has no one to turn to but his own two fists!

As with any movie series that lasts so long, this fourth entry into the ‘Best Of The Best’ franchise takes a noticeable dip in quality. This time around, they don’t even bother trying to connect the events to previous outings and the film is just a very generic action affair with a practically non-existent storyline. The character of Tommy Lee is once again the film’s main focus, but sadly he has now been downgraded to nothing more than a John McClane wannabe who seems capable of beating an entire army of bad guys single-handedly. Known actors such as Ernie Hudson, Tobin Bell and Paul Gleason are also added to try to lift the proceedings, but they too are wasted in very weak roles that prevent them from showing their true quality. The film does still have some small saving grace in the form of the action scenes, which boast a handful of decent vehicle stunts and some fun fights that do just about enough to prevent the film from becoming a completely lost cause.

There really is no disputing that ‘Best Of The Best 4’ is a far cry from the quality we have come to expect from the series, and this is basically nothing more than a very faceless action movie. It’s a shame really because it not only provided a somewhat sour finale to an otherwise great franchise, but it also appears to have signalled the end of Phillip Rhee’s promising acting career.