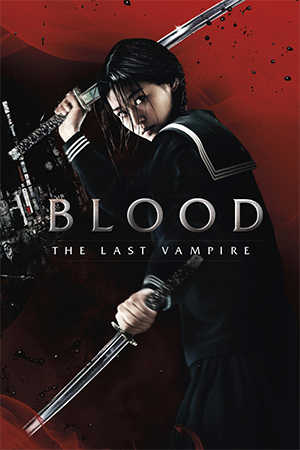 Based on the 2000 anime movie of the same name, ‘Blood: The Last Vampire’ follows a half-human, half-vampire called Saya who spends her time hunting those who are half her kind i.e. Vampires. Loosely working with an organization known as “The Council”, which devotes itself to the hunting and killing of vampires hiding amongst the human population, Saya enrolls in a high school on an American army base in Tokyo where she forms her first human friendship in centuries with the young daughter of the base’s general. Proclaimed by Saya herself, the only reason she lives is to hunt down and kill the “oldest and most powerful demon”, known as Onigen, who she believes was responsible for the death of her father when she was very young.

As a moviegoer, I for one am after one thing… action! Thankfully in this department ‘Blood’ doesn’t let you down and the scenes are very well choreographed, which isn’t surprising considering the guy who is credited as the “action director” here is Corey Yuen Kwai.  Three action/fight scenes particularly stand out; one involving Saya’s mentor (Yasuaki Kurata) battling a dozen guys in a forest, another being a sequence in an alley, and the last being the obligatory Final battle sequence.

Overall though, the film is a forgettable one. Much of the story could have been padded better, with the format really revolving around getting to the next action sequence when more depth to the characters would have been far more beneficial. It does have that manga feel (although maybe it’s slightly more cartoonish) which I guess is the kind of film you’re watching, but the over-use of wires really detracts. However, with a title like ‘Blood’ you would expect some, and at least in that department it doesn’t disappoint.

So in the end, ‘Blood: The Last Vampire’ is a fair film. Like I said before, it’s nothing that will stay with you but as a popcorn movie it’ll just about quench your thirst. Maybe even enough for you to dust off those old Ninja videos for one last play.