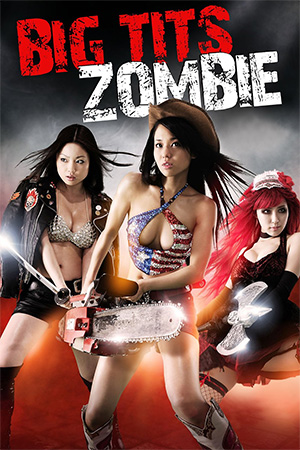 Lena (Sola Aoi) is one of five strippers who all work at a customer-less club called Paradise Ikagawa Theatre. Though the girls all perform dance routines together, their off-stage relationships are rocky to say the least. That all changes however, when they discover a secret passageway that contains the Book of the Dead. As is so often the case in these situations, one of the girls reads the incantations from the book out loud and an army of the undead is unleashed upon the world. Now only these five busty beauties can stop the zombie horde from wiping out humanity!

When a movie has a title like ‘Big Tits Zombie’, you expect it to deliver two things; Boobs and blood. While this film does indeed contain smatterings of both, it’s not quite as entertaining as the title would have you believe. For starters, the story is little more than an ‘Evil Dead’ clone with a group of strippers replacing the kids in the cabin. A cheesy but possibly entertaining idea, you may think, but sadly the execution is severely disappointing. Aside from the heroine’s limited wardrobe, the only real plot device seems to be that the girls have an obvious dislike for each other. This means that an awful lot of the running time is spent on them being generally bitchy, and the fact that all of the characters are fairly dislikeable only makes this even more painful to watch. There are a couple of passable gags and Sola Aoi is decent-ish in the lead, but on the whole it’s definitely a hell of a lot duller than you would expect.

When the second half of the film rolls around, the zombies are finally unleashed and this is where you would expect ‘Big Tits Zombie’ to shine. Sadly, the obvious lack of funding makes everything look downright awful. This seems to be something that the filmmakers are abundantly aware of, so they go all out to make it look even crappier. The resulting effect is not pretty, as the blood and guts appear to be made using mashed up jelly while the zombie make-up looks like a combination of talcum powder and marmite. The little action that we get to see is equally disappointing, with Sola Aoi clumsily swinging around a plastic chainsaw as CGI blood spatters across the camera. Of course there are still the boobs left to entertain, but I have to warn you that their screen time is extremely limited and it is hardly what you would call erotic.

‘Big Tits Zombie’ is a bad movie, and probably the worst kind of bad movie; a self-aware one. Much like a lot of recent so-called grindhouse movies, it just tries too hard to capitalise on its overall cheapness. Boobs and blood can be a fun distraction but they aren’t enough to make up for a complete lack of anything else.