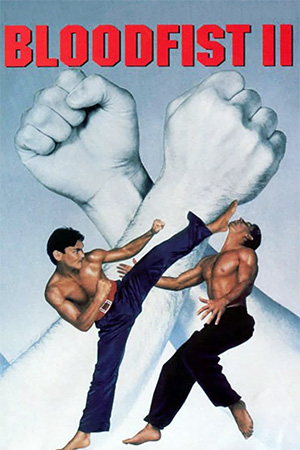 After he kills an opponent in the ring, kickboxer Jake Raye (Don Wilson) vows to never fight again. A year later and his life has really hit rock bottom, but a call from his old trainer leads him to Manilla. Once there however, Jake quickly runs into trouble with a local gym boss and is taken captive against his will. Along with a group of other professional fighters, he is then transported to an island where all of the men will be forced to compete in an underground fighting tournament. Unfortunately, the organisers didn’t realise just how good Jake actually is!

This follow-up to 1989’s ‘Bloodfist’ is in fact an in-name only sequel that sees Wilson and Mari Avellana return to play different characters. In a way, I guess this makes sense as the first film really had nowhere else to go and, as John McClane once said, “how can the same shit happen to the same guy twice?”. Still, considering the title and the fact that Wilson’s character has the same name, it would have been nice if they had at least tried to connect the dots. Luckily though, the all-new story actually works in the film’s favour, as even though it is still very cliched and predictable it does at least feel a little bit fresher. There’s also a fairly obvious ‘Enter The Dragon’ vibe to the whole affair, and it all comes across as a lot more focused than the original. Obviously I still wouldn’t call it good in the traditional sense, but it is a familiar slice of cheese that certainly goes down easily.

The action on offer in ‘Bloodfist II’ also proves to be a step in the right direction. For starters, we can actually see what is going on! The constant close-ups seem to be a thing of the past and some of the action is actually fairly well shot. There’s also some semblance of choreography in effect, and this definitely helps to show off some of the varying styles that the fighters use. Unfortunately, a lot of it does still have a bit of a 1960’s Batman “kerpow” factor, but at least we actually feel like the combatants are genuine fighters. Perhaps most importantly though, Wilson himself has improved and even though his technique is still a little too overly simplistic for my tastes, you can clearly see that he is making more of an effort.

‘Bloodfist II’ is a mild improvement on its predecessor, but that still doesn’t make it a great film. A lot of the same cliches and flaws still plague the production, and it is by no means a recommended martial arts movie. If you appreciated the trashy goodness from the original though, it’s likely you’ll find more to enjoy here.