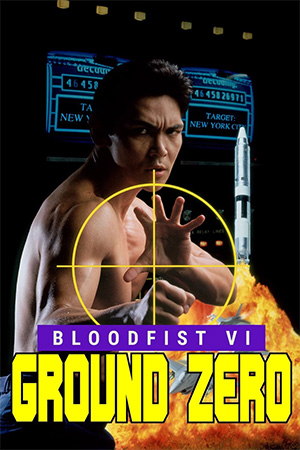 On just another routine day at a nuclear weapons launch site, daily rounds are interrupted by the arrival of a lost tourist at the front gate. However, all is not as it appears as hidden inside this seemingly ordinary camper van is a group of heavily armed terrorists who storm the building and attempt to secure the launch keys. Despite using strong-arm tactics, one officer is unwilling to submit and he is able to delay proceedings just long enough for a military courier by the name of Nick Corrigan (Wilson) to make his way inside. Although he doesn’t immediately notice the problem, Corrigan is attacked before he can complete his work and forced to take action. Unfortunately for the terrorists though, this is no ordinary courier…

During the ’90s, there was a period when action movies were obsessed with using the ‘Die Hard’ inspired “terrorists takes over a something-or-other” scenario. Unsurprisingly, the brains behind the ‘Bloodfist’ series eventually got wind of this trend and decided to re-cycle it for ‘Bloodfist VI’. While it’s obvious that the film lacks the budget to compete with the bigger boys, it still has to be said that this is a pretty poor example of the sub-genre. Part of the problem is that the whole affair just feels a touch too similar to Steven Seagal’s ‘Under Siege’. From the predictably cheesy nuclear themed backdrop to the obvious double crosses and inside men, it all comes across as a bit of a copy and paste job without any real personality of its own. Wilson also struggles to do much to keep it interesting, mainly because his supposed super soldier is hugely underwritten and seems to lack any actual special skills. As for the villains, they too are all cardboard cut-outs that are par for the course, especially the main bad guy who sports a generic foreign accent that seems to suspiciously come and go.

The action on offer in ‘Bloodfist VI’ is equally unsatisfying, opting to stay within the very simple confines of a few basic punches and kicks. Wilson does of course bust out his usual two or three flying kicks which we’ve seen him do a thousand times before, and a couple of the henchmen also seem to be somewhat adept with their kicking skills. However, none of it really adds up to much as most of the combat seems to consist of Wilson getting slapped around a bit before he pulls off a slow motion front kick, or a few shootouts that take place from about 3 metres apart. I guess you could say it’s fine if you’re not looking for anything flashy, but it does mean that you are rarely satisfied after seeing a bad guy get taken down.

If the idea of a ‘Die Hard’ clone with sci-fi channel levels of acting and action sounds appealing, then you may get a kick or two out of the low budget cheesiness of ‘Bloodfist VI’. For everyone else, this is probably not going to prove to be a very satisfying watch unless you’ve already had an alcoholic beverage or ten.