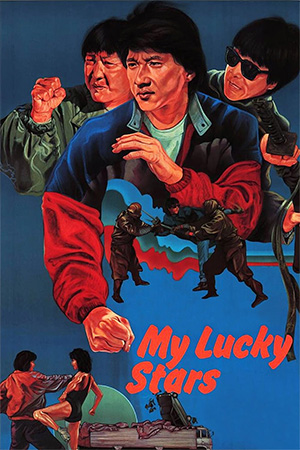 Muscles (Chan) and Ricky (Biao) are two Hong Kong policemen sent to Japan to serve an extradition order on a dangerous criminal (Lam Ching-Ying).  When the bust goes wrong and the criminal escapes with Ricky as a hostage, Muscles is left with no way to get close to the gang without being recognised.  To get around this dilemma, he decides to enlist the help of his old orphanage buddies to help bring the criminals to justice.  The gang consist of fatherly figure Rawhide (Fong), womanising Herb (Chin), insane Sandy (Ng), portly Kid’s Stuff (Hung) and dim-witted Roundhead (Tsang).  After a little crafty blackmailing the gang all agree to help but will their amateur skills be good enough for a little detective work or will their childish jokes blow their cover wide open?

Although the majority of its marketing may lead you to believe otherwise, ‘My Lucky Stars’ is definitely not a Jackie Chan film. Instead, this is the second team-up for a group of actors that became fondly known as the ‘Lucky Stars’. Their first film, ‘Winners And Sinners’ was primarily a comedy although it did still feature a few big stunts and a cameo from Chan. This second outing continues in a similar vein, with our band of hapless heroes getting into all sorts of silly scrapes while Chan pops up every now and again to flex his muscles. As we have come to expect, the majority of the comedy is very slapstick in nature but it certainly has an innocent and naive charm that makes it extremely appealing. There are also quite a few routines that are perfected here, such as the group’s attempts to woo the female lead, that later became the bread and butter for all of their future features.

‘My Lucky Stars’ may well disappoint if you’re looking for a typically fight-filled outing starring the infamous three brothers (Chan, Hung & Biao). However, if you’re a fan of Hong Kong comedies then this one certainly delivers the goods and you’ll also be rewarded with a couple of hard-hitting action scenes along the way.