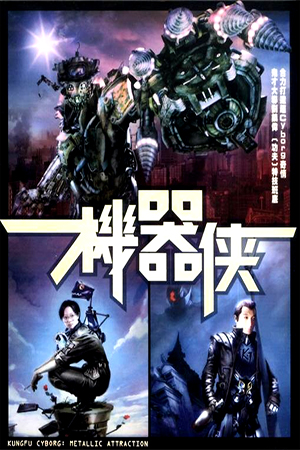 When director Jeff Lau said he was inspired to create ‘Kung Fu Cyborg: Metallic Attraction’ after watching ‘Transformers’, the warning bells should have been loud enough to scare me off; to think that such a downright insulting piece of pulp cinema could inspire anything other than self-harm is beyond this reviewer. Lau is not exactly the steadiest film-making hand either and his attempts knit together every genre from Canto-comedy and sci-fi to Italian Neo-Realist cinema (well not quite, but its only a matter of time) have proved to be wildly inconsistent in the past. Yet ‘Kung Fu Cyborg: Metallic Attraction’ trumps all of his other stupefying brews, having the consistency of discount wallpaper paste while never being quite as useful.

‘Kung Fu Cyborg: Metallic Attraction’ starts with upright rural cop Dachun (Hu Jun – the ‘Red Cliff’ films seem a lifetime away now) passing a test to prove his integrity to his superiors and a secretive scientific team keen to utilise his talents. Though Dachun is expecting a promotion to the city, the task he’s given is far less inviting: act as a guradian for top secret police cyborg K-1 while he integrates with his fellow officers. The honest law enforcer resents his new partner – whose real purpose is concealed – as his unusual charm begins to woo the shy Su Mei who Dachun had long held a candle for. He uses various means to sabotage K-1 and warn off the startstruck Su Mei, but finds himself reliant on the cyborg’s talents when a defective model, K-88, begins to attack its creators.

A significant flop at the Hong Kong box-office – though redeemed by respectable Mainland figures – ‘Kung Fu Cyborg: Metallic Attraction’ is the kind of tripe that might kill the public’s interest in local films once and for all. ‘The Beast Stalker’ was a recent production that respected its audience, giving quality, intelligent work for viewers. Jeff Lau’s disaster couldn’t be less respectable to the unsuspecting viewer if it kicked them to the ground, spat in their hair and demanded them to do impressions of a hippopotamus writhing around in filth. Admittedly, a few minutes of wacky humour breaks the ice early on, but then the parochial lunacy turns the whole production into the kind of pantomime only children in borstal should have to sit through.

After nearly an hour of the ‘hilarity’ and over-ripe drama, Lau throws some badly orchestrated action into the mix, highlighting the odd blend of good and terrible special effects that dominates the rest of the film. All of the inventiveness we come to associate with Hong Kong cinema is mercilessly sacrificed, the film-makers choosing a desperate plea to be loved by Western viewers bludgeoned by the loud and stupid blockbusters we had to endure recently. As a continued supporter of Hong Kong cinema, it gives me no pleasure to call this absurd mess the biggest waste of a big budget in recent memory.