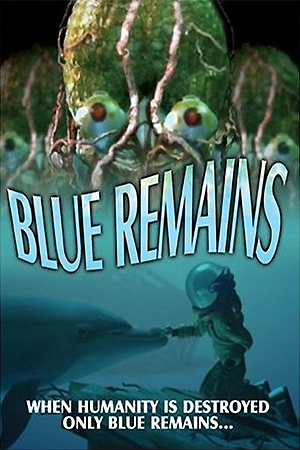 When the earth is ravaged by a nuclear war, one family is given the sacred mission of reviving the land with the use of special seeds. To avoid the after effects of the massacre, they are forced to take refuge in the depths of the ocean but the parents soon find the radiation taking it’s toll. They decide to place their fourteen-year-old daughter Amamiku into stasis to protect her and allow her to eventually fulfil their mission. However, when she is revived 90 years later she finds that the land is still unsafe and her exploration unleashes the wrath of the murderous Glyptofane, a primal being intent on wiping out the human race.

When I first laid eyes upon ‘Blue Remains’, the animation style reminded me of the old 80s and 90s video game cut scenes. At that time, games were still in their infancy so the majority of these scenes were fairly cheesy and shallow.  Unfortunately, my first impressions proved to be eerily accurate as ‘Blue Remains’ is a somewhat dull affair that feels more like a test of technology than a competent slice of entertainment.  The story used to paper over these gaps is the age old examination of the self-destructive effects of the human race but in this case, it just seems like an excuse to show another post apocalyptic earth as well as attempting to divert your attention from the film’s lack of emotional pull. On top of this, the dialogue is awful and seems like it was inserted to fit the static animation, which not only makes the voice actors pause at odd moments but also adds unintentional humour in all the wrong places.

I’m loathed to attack the animation style of ‘Blue Remains’ as it’s clear the creators were doing the best they could with the tools available to them but it does also prove to be one of the film’s biggest downfalls. The main problem here lies with the human characters that clearly only have three main facial expressions – suprise, frowning and (sort of) smiling. With these kinds of limitations, you really become detached from the “people” in the story and it gives the film a cold feel that could have been avoided with hand drawn animation. On the flip side though, the external shots are quite impressive and the film finds it niche whenever there is a vehicle or landscape on screen as these always look technically sound and show real signs of promise. This led me to wonder why they bothered to add the human element into the film at all as they would have been far better off making a film using robots as the leading characters.

It’s commendable that the team behind ‘Blue Remains’ opted to try something different but unfortunately the technology at the time just wasn’t up to the task. Added to this, the story is weak and doesn’t do anything to help distract you from the crappy animation so I’m sorry to say that this is one movie best left lurking at the bottom of the deep blue sea.