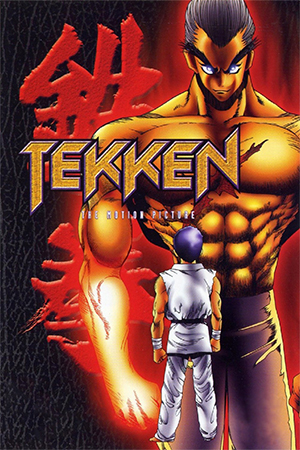 When the police learn that wealthy mogul Heihachi Mishima is organising a martial arts tournament on an offshore Chinese island, they send in two of their finest officers to gain some much needed intelligence. Meanwhile, Heihachi’s hated son, Kazuya Mishima, is desperately seeking vengeance and decides to secretly join the fighters so that he can kill his father. However, his adopted brother, Lee Chaolan, has other plans and hopes to wipe out all of the competitors before they can even get close to Heihachi…

Another day, another disappointing video game to movie adaptation. This time it’s the turn of the popular fighting franchise ‘Tekken’, which originally debuted as an arcade game back in 1994. Made three years later, this animated outing chooses to focus mainly on the backstories of Jun and Kazuya. Initially, this seems quite promising thanks to a few interesting revelations and semi-accurate events, but sadly things quickly start to fall apart. After establishing Kazuya’s hatred for his father and Jun and Lei Wulong’s mission, the film doesn’t really seem to know where to go. In an attempt to fill up the time, it just starts to jump from one character to another without ever fully explaining their purpose or predicaments. This approach leaves those of you unfamiliar with the source material completely baffled, while hardcore fans are likely to be perturbed by the film’s lightweight approach. It’s also worth noting that several liberties are taken with the game’s timeline and a lot of the more interesting personas, such as Law, Paul and Yoshimitsu, are resigned to nothing more than visible cameos.

Considering it’s a movie based on a tournament fighting game, you’d expect ‘Tekken: The Motion Picture’ to at least contain a moderate degree of action. Even though it does indeed feature a tournament (*gasp*) with a couple of notable confrontations, it doesn’t ever really seem to be taken all that seriously. During the latter stages of the movie, a couple of sub-characters appear and start fighting on an island, but none of it seems to be very official and there is definitely no overall winner. The majority of the action is also somewhat underwhelming, even taking into account the limits imposed by the basic animation techniques. As seems to be the standard with these adaptations, most of the fights are resolved within a couple of hits and none of the characters ever seem to use their signature moves.

‘Tekken: The Motion Picture’ is far from being the definitive adaptation of the video game. Even though it does get some of the backstory correct, it just seems far too muddled and mundane to please the game’s fanbase. As for newcomers, just forget about it because you’ll probably be lost (and bored) before the film even hits the halfway mark.