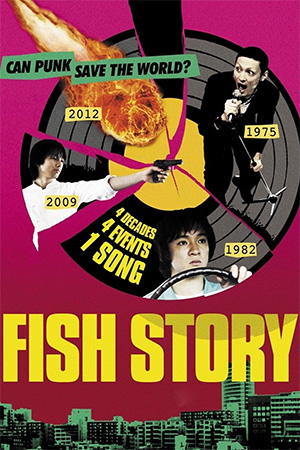 From visionary director Yoshihiro Nakamura comes ‘Fish Story’, a time-warping underdog story that offers viewers an uplifting, revelatory, and altogether hilarious statement about the power of art to enact real change in the world. Based on the novel by Kotaro Isaka, ‘Fish Story’ is Nakamura’s second of four adaptations of the author’s work, a list which includes ‘The Foreign Duck, the Native Duck and God in a Coin Locker’ (2007); ‘Golden Slumber’ (2010); and ‘Chips’ (2012). Although I must admit that I’m not familiar with Isaka’s fiction or Nakamura’s subsequent adaptations, I’ll be sure to seek them out, especially if ‘Fish Story’ is any indication of their quality.

For those of you who aren’t familiar with the term, a “fish story” is synonymous with a tall tale, its name inspired by how fishermen tend to exaggerate the size of their catch—or, perhaps more accurately, the “one that got away.” As promised by its title, ‘Fish Story’ offers an improbable story of its own, one that begins in the desolate, garbage-infested streets of a (then) near future Tokyo. The year is 2012, and the infamous Mayan doomsday prophecy appears to be coming true. In fact, only a few hours remain before a comet hits the planet and destroys all of humanity in the process. Amidst these deserted city streets, a lone man (Kenjiro Ishimaru) emerges on an electric mobility scooter. To his complete shock, a neighborhood record store appears to be open for business. Didn’t they get the memo about the apocalypse?

The befuddled man can’t help but investigate the premises, only to discover a bizarre sense of normalcy. Like any other normal day, the proprietor of the establishment (Nao Omuri) is talking about music with an enthusiastic customer, even as the world is seemingly coming to an end. How could they possibly be listening to old albums at a time like this? To paraphrase both the clerk and the customer, “Why wouldn’t we?”

During this amusing opening sequence, which playfully comments on American disaster movies like ‘Armageddon’ (1998) to great comedic effect, we learn about a forgotten band that released one album—the titular ‘Fish Story’—before calling it quits. From here, the film begins its long, strange journey into the past, as the narrative alternates amongst at least four different storylines set during different eras.

In the time period that spans 1973 to 1975, we meet Gekirin, a punk band before punk even existed in Japan. As the movie reminds us, The Sex Pistols have yet to debut in England when Gekirin enters the music scene. As a result, the band’s overall sound is a bit too much for Japanese audiences to take. While a manager does sign Gekirin to a deal, the studio wants the band to water down their music to make it more palatable to the masses. Gekirin—with Atsushi Ito as the lead guitarist, and Kenjo Kora as its charismatic vocalist—is less than happy about the commercially-driven demands of the music label. This section of the film, equal parts funny and dramatic, feels almost like a snippet from the best kind of musical biopic, despite the band in question having never even existed.

Surprisingly, the film then shifts to 1982, where we meet a meek university student named Masashi (Gaku Hamada), who has been given the unenviable task of driving around two loutish classmates to pick up some girls. During their little road trip, they talk about Gekirin’s release of ‘Fish Story’, which, for reasons yet to be explained, boasts a minute-long section of complete silence. Urban legends suggest that it masks a woman’s scream on the recording, and only people with psychic abilities can actually hear it. This little detail hearkens back to all the urban legends I heard as a youth about the danger of playing “Stairway to Heaven” backward, the truth about what KISS “really” stands for, and, more directly, the origins of a high-pitched scream on the song “Love Rollercoaster.” During the ensuing group date, Masashi is treated like a fifth wheel—that is, until one of the girls (Mai Takahashi), a self-proclaimed clairvoyant, says he’ll meet the woman of his dreams that night. Is she really a psychic or just giving him a signal? Whatever her true intentions, Masashi’s mettle will be tested—albeit in unexpected ways.

After a brief sojourn to 1999 (another suitably apocalyptic date), ‘Fish Story’ then jumps forward even further to 2009, where we bear witness to a chance encounter on a cruise ship between a schoolgirl named Asami (Mikako Tabe) and a mysterious waiter (Mirai Moriyama). The girl is in tears, after falling asleep during a school field trip and thus missing her chance to disembark. The waiter takes pity on the young girl and tells her the story of his life. And then a band of terrorists show up. To reveal any more would spoil the fun.

As you may have gathered from my synopsis, every single major storyline in the film centers on underdogs who are forced to stand up for themselves in the face of overwhelming odds. At every turn, the film constantly subverts expectations, creating situations that initially seem all-too familiar before sending them in unexpected, often hilarious directions. Somehow, Nakamura strikes a fine balance among all these disparate timelines, making each substantial enough in their own right to capture our attention.

By the finale, everything will make total sense, as these distinct chronologies line up in surprising, revelatory ways during an extended montage, all set to the soundtrack of “Fish Story,” the film’s enigmatic, rousing theme song. So many narratively ambitious movies fall flat, but I’m happy to report that ‘Fish Story’ sticks the landing. For my money, the film delivers one of the most satisfying, exhilarating, and unexpectedly moving endings I’ve seen in a long time.

Now, almost a decade removed from its original release, the film’s themes remain both relevant and vital. At its heart, ‘Fish Story’ offers us the hope that maybe—just maybe—no matter how poorly received or commercially unsuccessful something was in its own era, that ultimately art, music, literature, and cinema still possess the power to change people’s lives and quite possibly even save the world. Unbelievable? Yes, but isn’t that’s a “fish story” worth believing?