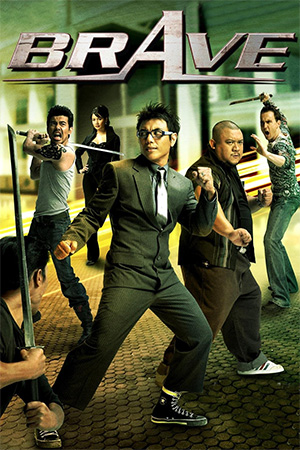 When his brother-in-law is kidnapped by a mysterious organisation, Bee is forced to steal a bank’s client data in exchange for his life. Once he has completed his mission though, the kidnappers don’t seem all that satisfied with the results and send several large men to take him out. Of course they didn’t count on Bee’s fighting ability and with a little luck, he is able to elude his attackers and escape safely with his brother. Meanwhile, the owner of the bank commits suicide and his wife is kidnapped by the same gang who have been chasing Bee. Feeling somewhat responsible for her predicament, Bee and his brother decide to head back into thick of the action to attempt a courageous rescue.

If you’re furiously clicking through IMDB because you’ve never heard of ‘Brave’, then you really shouldn’t be too hard on yourself. Receiving very little international recognition, the film is a fairly low budget Thai action flick that owes more to ‘Ong Bak’ than originality. Much like the aforementioned fightfest, ‘Brave’s fatal flaw is that it seems to be incapable of stringing together a particularly entertaining or coherent storyline. Aside from the fact that it is a cliché ridden mess, the major issue is that it tries to throw in about a million different subplots, all of which seem to pop up out of absolutely nowhere. As you would expect, this removes any hope of empathy with the main character’s predicament and the fact that every storyline is so laughably stupid only seems to make matters worse. As if this wasn’t bad enough though, the assembled cast are all utterly terrible, particularly leading actor Michael B. who comes across as a smug little git rather than a hero you can root for.

As with a lot of Thai action films though, there is a small redemption to be found in the action scenes. Well, that may be true if I could actually see them! I say this because ‘Brave’ is guilty of the most heinous of action movie crimes – bad camera work! And this isn’t just me being overly picky either as almost every single fight seems to have been shot with the cameraman sat on a swing, rocking from left to right. That aside though, this is still a pretty weak effort that rarely manages to pull out any of the stops. There are only really three fights to speak of and the first one is pretty boring to say the least. Michael B. appears to be more of an acrobat than a fighter so he just seems to dodge his opponents and the majority of his hits look more lucky than skilful. The other two scenes are a bit better I suppose, mainly because one is very reminiscent of the building site sequence in Jackie Chan’s ‘Mr Nice Guy’, while the other one finally manages to throw in a couple of bone crunching hits. To put it simply, there really isn’t anything special here and any half decent moves seem to spoiled by the drunk cameraman.

‘Brave’ isn’t exactly the worst movie ever made, but it does do a hell of a lot wrong. The very limited and poorly shot action sequences are a huge letdown and the rest of the film is just one bad plot twist on top of another. Definitely one for the rental pile at best.