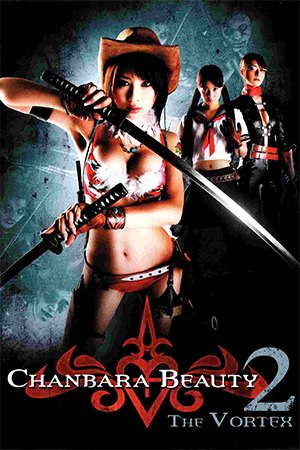 In the year 20XX, the world looks to be coming to an end as the infestation of fierce zombies grows ever larger. The ultimate battle sisters, Aya and Saki, continue to fight for survival but their job is becoming increasingly difficult thanks to the arrival of Himiko, a new enemy who is capable of manipulating the zombies. When Himiko offers to resurrect her parents, Saki weakens and decides to help Himiko obtain everlasting life in exchange for the return of her family. However, Aya won’t just sit back and let her sister turn to the dark side, so she sets out on a quest to put a stop to Himiko’s plans and take down as many zombies as she can in the process.

Although it lacked the campy sense of fun that often accompanies some of the finer slices of Japanese VCinema, I quite enjoyed the original ‘Chanbara Beauty’. The film gave us a relatively distracting storyline mixed in with a healthy helping of scantily clad ladies hacking and slashing their way through hordes of zombies. Despite trying its hardest to give us more of the same, this second outing proves to be far less enjoyable. The main reason for this is that ‘Chanbara Beauty 2’ just doesn’t seem to give a damn about the story. I know, you’re probably all thinking that half naked girls with swords don’t need a story, but you do at least need something mildly interesting to maintain your attention in-between the fights. Unfortunately, some vague rumblings about purebloods and a supposed double cross don’t quite cut it, and the fact that the main characters are completely devoid of personality doesn’t exactly help matters. As if this wasn’t aggravating enough, the acting is also extremely wooden and even though she shares similar physical assets, Yu Tejima isn’t even half the leading lady that Eri Otoguro was.

The fight scenes in ‘Chanbara Beauty 2’ should be the film’s saving grace but even these quickly prove to be a let-down. The opening battle shows some promise, with a noticeable increase in pace and a selection of zombies that actually fight back rather than just running into the swords. However, it’s the overreliance on CGI blood that ruins anything remotely entertaining that ‘Chanbara Beauty 2’ has to offer. Normally I can cope with the obvious computer generated effects but the problem here is that it doesn’t just look stupidly fake, it is constantly sprayed across the camera lens obscuring half of the action. Quite why they decided to do this is beyond me because even if the director thought the effect looked nice the first time around, surely someone should have told him that using it in every single fight is just plain stupid. Throw in some terrible shaky cam and a couple of silly special moves and ‘Chanbara Beauty 2’ turns out to be one hell of a disappointing package.

The first ‘Chanbara Beauty’ was a solid opener that proved the concept was more than capable of making the leap to live-action cinema. Sadly, thanks to a mind-numbingly dull story and some weak leading performances, ‘Chanbara Beauty 2’ somehow manages to suck all of the fun out of bikini clad zombie slayers. Shame on you!