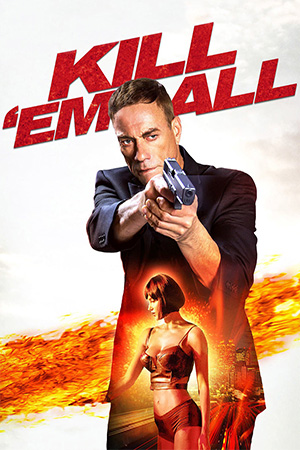 Van Damme is still managing to churn out a decent flick now and again (‘US: Day of Reckoning’, ‘Enemies Closer’, ‘Black Water’) but unfortunately ‘Kill ‘Em All’ is not one of them. Despite teaming up with long-time friend and collaborator Peter Malota (‘Double Impact’, ‘The Quest’, ‘The Order’), here making his directorial debut, ‘Kill ’Em All’ has a gem of an idea at its core but squanders it with needless flashbacks, unnecessary characters and terrible editing.

The initial set-up has an injured Van Damme being rushed into an about-to-be-closed hospital only for a gang of heavily armed goons to storm the place looking to kill him. With only his bad ass skills and the help of a plucky nurse (Reeser) to ward off the gun-toting killers this should have been a fun, action packed riff on ‘Assault on Precinct 13’. Instead, we get most of the story unfolding from an interrogation room where Reeser is grilled constantly by Peter Stomare and Maria Conchita Alonso, too many flashbacks to Van Damme’s earlier life and questionable editing choices that renders most of the action and momentum lifeless.

While the constant cutting back to the interrogation and flashbacks seems to be an attempt to make this more than just a straight action picture where Van Damme fights off bad guys in a near abandoned hospital, the flick really should have just stuck to that concept: especially when the it’s called ‘Kill ‘Em All’! The slipshod editing and narrative structure render proceedings frustrating when they should be exhilarating and every time the proceedings flick back to the past or the interrogation room, one just wants the action to get back to the hospital. The film is far more entertaining when it focuses on this section and while the editing is still very choppy, Van Damme manages a couple of semi-decent fights: one with his son Kris Van Damme and the other with ace bad dude Daniel Bernhardt.

Stomare and Alonso seem to be there for pay cheques, Paul Sampson (‘Tokarev’) makes for a decent big bad (though when you have Bernhardt, you really don’t need another bad guy!), Van Damme looks exhausted (though gives his best tough and gruff) while Reeser does most of the heavy lifting in the acting department: it should have been her movie where she fights off all the hospital storming goons!