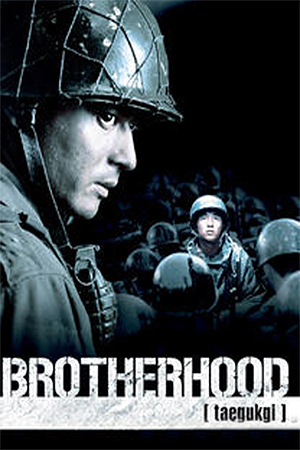 Brothers Jin-Seok (Bin) and Jin-Tae (Dong-Gun) are living a lowly but happy life in 1950’s Korea: Jin-seok working hard at his studies while Jin-Tae shines shoes for money and hopes to send his brother to University and open his own shoe making business. They take care of their mother and Jin-Tae’s fiancé Young-Shin (Lee) and her younger sisters and, in general, life is good. That is until North Korea declares war on South Korea and the brothers are literally pulled off the streets and enlisted to fight for the South. No sooner have they been ripped from their peaceful life they are thrust into the true horrors of war: with battle after battle breaking them and their fellow troops down as they contend with unrelenting violence, harsh conditions and are forced to do unimaginable things all in the name of their country. Jin-Tae takes to battle much easier and quicker than Jin-Seok who is a terrified wreck in their initial skirmishes. Thus Jin-Tae does whatever he can to send his brother home, turning into a super soldier who tears through the North’s soldiers with relish in the hope that his actions will grant him permission to send his brother home. But as the war continues the brother’s drift, as Jin-Seok becomes stronger while Jin-Tae sinks deeper into a dark and violent world of war that he now seems at ease in.

While ‘Brotherhood’ is a good looking, big budget and technically impressive film, it in no way shies away from showing the horror of war and the squalor of the trenches. Kang Je-Gyu’s film is a big, bold and often exhausting account of the continuous cycle of violence the two brothers find themselves in. Not for the weak of stomach, the filmmakers leave little to the imagination as the violence of war is vividly shown and recreated in many huge scale battle sequences: legs and arms are blown off, maggots are found in wounds, faces thrust into fires, bodies ripped apart by booby trap bombs, suicides and executions galore. While it’s all vividly and violently rendered, ‘Brotherhood’ is far from an exploitation film as Kang Je-Gyu creates an often realistic and never ending succession of battles, missions and surprise attacks that must have been the day to day life of the Korean soldier. Re-creating all the battles and worn torn countryside on a grand scale, ‘Brotherhood’ is an impressive achievement and there is much for the war combat enthusiast to feast on here.

Actors Jang Dong-Gun and Won Bin, as the brothers torn apart by war, are exceptionally good, convincing as brothers and each carrying a large emotional weight throughout the film they handle their character’s transformations with depth. Jang Dong-Gun especially, who goes from strong willed fighter, to insane killing machine, to a man seduced and immersed in a life of violence which he now seems to enjoy: come the finale third the character only seems to want to kill, no matter who they are or what side they are on.  This brings us to the unfortunate downside of proceedings. On more than one occasion narrative changes seem to happen just a little too quickly and conveniently and come the final third several plots diversions and Jin-Tae’s seemingly unstoppable sink into the world of war violence (including joining the opposition at one point!) seem unrelenting despair just a little too far. The opening scenes are also set up so deliberately happy and cheerful that one is just waiting for proceedings to all-of-a-sudden change into war hell and horror (which they do) to show how much the main character’s lives have changed.

Still, these missteps do not stop ‘Brotherhood’ from being an unflinching look at a violent part of Korea’s history and how the terror of war really does tear people apart both figuratively and literally. War on the big screen doesn’t get much more convincing or graphically rendered than this.