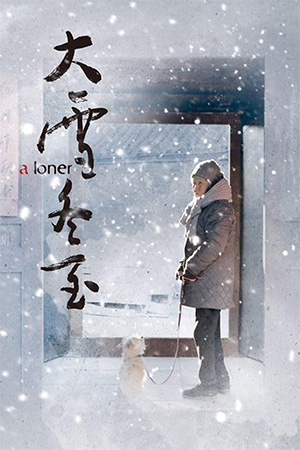 In a quiet Beijing back-alley, elderly resident Wei reflects on her life. Now in her late seventies, Wei lost her husband many years before while her children have all moved out and concentrate on their own lives. Wei’s routine, therefore, is devoted to her dog and the daily exercise of going to the market and seeing the same familiar faces. When her few remaining connections to the world begin to disintegrate when her dog goes missing and her family are unable to visit, Wei begins to feel the suffocating loneliness of a solitary pensioner in a big city.

Writer and director Xing Xiao tackles a problem that has become a topical concern for China, namely the sight of elderly citizens left to fend for themselves; socially, the country has changed drastically and it seems that the traditional idea of caring for the elderly within the extended family has become a very pertinent concern. It’s therefore admirable not to say essential that films like ‘A Loner’ are made and this silent problem of thousands, potentially millions, left to fend for themselves is brought to the public attention.

The topic is worthy and vital, but ‘A Loner’ might not be the finest example of the problem. Too intentionally oblique and distanced to make a connection with, Xiao’s film loses the audience in the day-to-day minutiae that ends up engulfing the protagonist – a common cinematic tactic, but one that doesn’t quite come off here. Although this is a moving film, its refusal to make things a little easier for the viewer means that it hardly stirs debate about the wider issue. While it’s thankful that ‘A Loner’ favours social realism and forgoes any soppy emotional triggers, it still struggles to find the human touch that a work like this desperately needs. It’s not possible to keep the audience at arm’s length throughout the whole film and then expect them to be stirred with righteous indignation by the end of it. ‘A Loner’ is therefore a solid, thoughtful meditation on a traditionally Western problem that is now creeping into the affluent East, but should have been more than its good intentions.