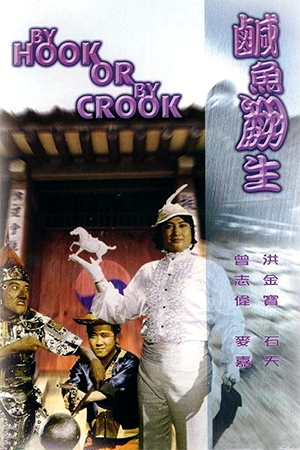 The Flower Kid (Wu Ma) was once a notorious thief who robbed from the rich to give the poor but he dropped out of sight many years ago and it is rumoured he retired.  When a new crime bearing all of his trademarks is committed, the Sheriff (Maka) assumes that he has re-surfaced and employs the services of the wily tracker Skinny Gee (Shek) to locate him.  Gee lays a trap for the Kid by setting up a fake jewel exchange but the only person that takes the bait is a petty criminal called Fatso (Hung).  Gee sees elements of the Kid within Fatso and employs his services to help him get inside his mind.  However, whilst on the trail the two partners soon discover that there is more to the tale than meets the eye as they encounter ruthless killers and deadly traps that threaten to impede their quest.

Dean Shek’s appearance in a kung fu comedy is quite a regular occurrence but more often than not it’s an unwelcome one.  His over-the-top slapstick routines and childish face pulling have rarely been more than an annoyance to most as they tend to interrupt the flow of the story.  Seeing as how he is the leading actor in ‘By Hook Or By Crook’, it’s no surprise that this film follows a similar pattern but we can be thankful that Sammo Hung and Wu Ma are on hand to help provide the viewer with a worthwhile watch.  Although director Maka appears to be a fan of the Charlie Chaplin-esque style that Shek revels in and can’t help but incorporate his talent, this doesn’t stop him from making the most of Sammo’s forte and allowing him to let rip with some top notch action.  As is to be expected from the big man, each sequence (although mainly played for laughs) brings something new to the screen which keeps the combat fresh and exciting.  Wu Ma can also not go by unmentioned as his succinct brand of straight humour that can often be ignored is regularly the main source of amusement here.

‘By Hook Or By Crook’ is far from Sammo’s finest work, mainly due to Shek’s inclusion in the mix which adds an excessive amount of outdated and overly simplistic humour.  However, Hung and Wu Ma still manage to keep the film interesting with their charming on-screen personas and some noteworthy kung fu routines.