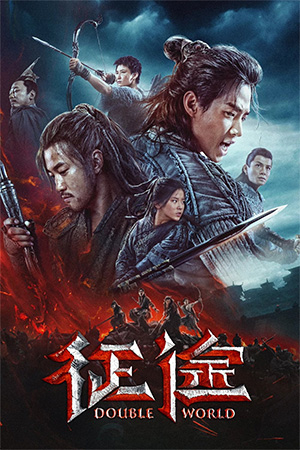 The director of ‘Bodyguards & Assassins’ and ‘Kung Fu Jungle’ returns with a big budget CGI slavered fantasy epic (wait, come back!) that while not as good as those aforementioned films (or even some of Teddy Chen’s earlier work) is still an entertaining ride thanks to some likeable characters, some impressive set-pieces and mercifully being under two hours. Based on a MMORPG game, ‘Double World’ is set within a fantasy world and time (there’s giant CGI beasties all over the place!) and sees young warrior Dong Yilong (Henry Lau) volunteering himself to represent his clan in a dangerous tournament being orchestrated by the Grand Tutor Guan (Hu Ming). He’s joined by fellow clan member Chu Han (Peter Ho) and subsequently (after various scuffles and shenanigans) Jingang (Lin Chenhan) and the three join the other clans of three participants to take part in a dangerous three stage tournament. However, Gran Tutor Guan has duplicitous reasons for staging the tournament which jeopardise all those taking part and subsequently sends Dong and Chu on a more dangerous path than they were expecting.

Big of budget and large in scope, ‘Double World’ starts out promising and begins to build to something rather exciting before petering off in the final third when it can’t quite keep up its momentum. As mentioned, the scope is large, and the setting is well realised via large sets and copious amount of CGI augmentation. Despite a few violent moments this is very light fantasy which is reflected in the bright colourful design and bubble-gum sheen, so no dark fantasy trappings here. Which is a shame as if the film had been a little darker, a little tougher and a little less reliant on CGI spectacle, ‘Double World’ could have been even better. As it is, the film is a spiky romp that benefits from the cool three level tournament the characters must partake in. This is particularly well realised in the first stage when all the clans must race across a massive chain-link pit, avoiding the huge spikes below, along with the large metal ball bearings that are released into the pit, all the while being chained to one another. It’s an inventive set-piece that blends CGI, practical action and tension well.

There are a few other decent fights here and there (including a scrap with some giant scorpions!) that benefit from Tung Wai’s tight and crunchy choreography, but the fights all tend to be short and sweet, stopping just as they’re getting thrillingly inventive. Instead, this makes way for more CGI nonsense, including the obligatory giant dragon, and a finale that just isn’t as exciting as the action that has come before it. Not to rag on the CGI too much as it’s decent and is used creatively compared for the most part.

The cast are game as well and the main leads refreshingly likeable. There’s also an interesting subplot with Jiang Luxia’s slave who is freed by Chu. She gives a strong performance, hinting at the darker tones the film could have gone with, but her storyline is not given enough focus instead making room for, yep, more CGI spectacle. Pity as Jiang Luxia is great, as is Lin Chenhan as the plucky Jingang but the two are given somewhat of a short shrift in favour of the two males leads more predictable (and therefore boring!) story arcs.

Still, ‘Double World’ is a decent fantasy filled ride that is for the most part well-paced, features some decent action and is fun while it lasts.