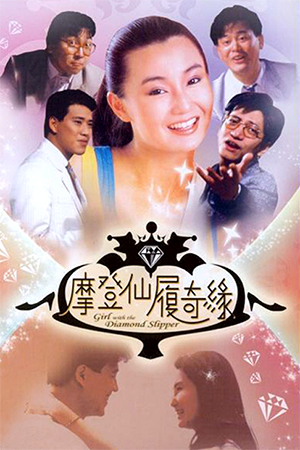 There’s a moment an hour into ‘Girl With The Diamond Slipper’ where, at a star-filled party, Wong Jing’s character throws a drink over an arthouse director. Though this has very little to do with the rest of the story, it acts as a clever piece of unintentional symbolism regarding Wong Jing’s style of film-making – absolutely no delusions of grandeur and no pretence of artistic merit. Such modest intentions and shameless commercialism can certainly provide moments of wonder, but it also tends to gravitate towards the banal. And on that note, step forward ‘Girl With The Diamond Slipper’.

Aspiring actress Chang (Cheung) lives with two fellow wannabes and dreams of one day becoming a screen star. Though this seems to be a day-dream, she finds herself thrown into the limelight thanks to the patronage of a lovestruck sponsor. Chang also receives unwanted attention from two bumbling thieves (Chan and Jing) who are keen to get their hands on a precious diamond that they temporarily hid in one of her new shoes. Unfortunately there is a far less friendly criminal (Wang Lung Wei) also searching for the diamond and, as he closes in on the blissfully ignorant Chang, the various parties surrounding the damsel in distress begin to show their true colours.

A very young and very cute Maggie Cheung – a million miles away from her current status as arthouse darling – features in this typically frenetic Wong Jing action comedy where the emphasis is definitely on the latter. Her wide-eyed innocence is undoubtedly a feature of mid-80s Hong Kong cinema – for many perhaps it a selling point – and it’s wisely used by Wong Jing to paper over the numerous cracks in this feature. Nobody goes into a Wong Jing film expecting narrative lucidity or even consistency, but ‘Girl With The Diamond Slipper’ is especially careless in its mixing of the sublime and the ridiculous.

Starting with a tangible spring in its step, this late attempt by the Shaw Brothers studio to rival the action comedies coming from Golden Harvest at the time has a cheerfully absurd opening thirty minutes. Mixing scenes of the oblivious heroine with a few amusing moments with the oafish thieves, ‘Girl With The Diamond Slipper’ is difficult not to warm to for anyone with a regard for 80s comedies. Wong Jing’s usual scattershot direction, though, means that the pace slackens severely and too many incidental scenes are shoe-horned in to add to the woe. Most films that would offer us Nat Chan and Wong Jing as the leading men are bound to outstay their welcome and ‘Girl With The Diamond Slipper’ is no different.

Wong Jing is often credited for his generic innovation, but his blatant plagiarism is equally well known. Here Wong clearly takes cues from the recent successes of Jackie Chan and Sammo Hung in the modern day action genre, using eerily similar sets and costumes in the closing half of the film. ‘Winners And Sinners’ and, to a lesser extent, ‘My Lucky Stars’ had a far better balance of comedy and action, helping to ensure that even when the film began to drag the audience could expect something special just round the corner. Though ‘Girl With The Diamond Slipper’ has a fine finale and some excellent physical comedy throughout, the decidedly flat middle section eats away at the viewer’s patience. The production therefore becomes an average film bookended by moments of real viewing pleasure, very much dependent on just how forgiving the audience is towards its weaknesses.

Those who slog their way through moments of typical Wong Jing inconsistency (not to mention the obligatory trip through mahjong hell) are treated to an impressive climax featuring a menacing Wang Lung Wei squaring up to Yung Wang Yu (who looks suspiciously like a Jackie clone). Intercut with some of the more effective comedy routines from our dubious leading pair, this fine ending is a partial reward for the hard work expended on the previous 40 minutes. Overall, it’s unlikely that this will be jostling with ‘In The Mood For Love’ at the apex of the Maggie Cheung canon, but the aforementioned ending and a few diverting moments throughout make this less arduous than it might appear.