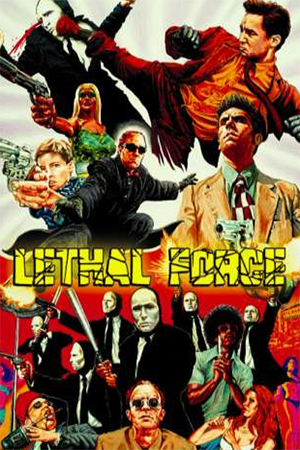 “You should have died when I killed you!”

‘Lethal Force’ is jam packed with awesome lines such as the one above; all delivered straight-faced in what could be the finest parody/love song to the action movie. Referencing everything from revenge thrillers, to 70s exploitation to John Woo flicks ‘Lethal Force’ achieves the impossible by being the best deliberately worst action movie ever. Cheap, sleazy, underground and most definitely hilarious, ‘Lethal Force’ is a fine slice of action exploitation.

Jack (Prather) has had his family kidnapped by the evil wheelchair bound Mal Locke (Hewitt). In order to get them back he must do Mal Locke’s dirty work which entails killing super assassin Savitch (Flagg Jr). Problem is, Savitch is Jack’ best friend and former army buddy and so finds himself turning on his old friend in order to save his family. Savitch has other plans, which for the sake of simplicity (and cramming in as many sight gags as possible) involves killing pretty much everybody and anybody.

Made on a cheap as chips budget, ‘Lethal Force’ packs in everything from kung fu strippers, to a lesbian henchwoman wearing a Fez, to ridiculously bad fights (and some good ones), to a solid dose of gore and torture. Rather than an outright piss take of the action genre (though there is plenty of that), the makers obviously love the genre they are sending up and the affection comes through, no matter the madness taking place on screen. Everything is played dead pan, this adding to the fun and mayhem and the makers have a riot sending up John Woo’s heroic bloodshed movies (the homoerotic undertones rather than all the ballistic gunplay), kung fu flicks and seedy exploitation movies.

The flick is crammed with over-the-top fights: some rubbish presumably on purpose (Savitch vs. The Bow Tie guy), some pretty good and inventive (Savitch fights off some mask wearing assailants with a baseball bat). As with all underground movies there is a requisite amount of insanity including crazy continuity, the running gag of Savitch being indestructible no matter what happens to him and the maddest knife fight ever, where Savitch uses the knifes that are speared through his hands (from a torture scene earlier) to thwart of the bad guys. Mad, gory and laugh-out-loud funny all at the same time.

‘Lethal Force’ should be seen with as many like minded action and eastern film fans and after copious amount of alcohol to appreciate the trippy madness and manic mayhem it provides. A better Grindhouse film than Tarantino could ever hope to make and a glorious nod to action flicks, ‘Lethal Force’ is a hoot from beginning to end.