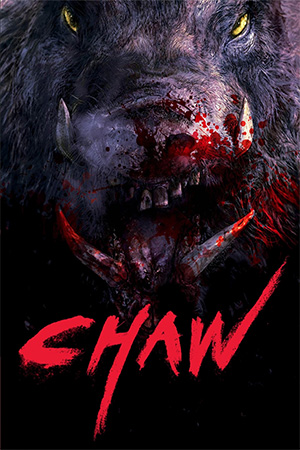 Fun spirited, slightly loopy, monster movie from Korea, ‘Chaw’ wears its devilish sense of fun proudly on its sleeve as a giant wild boar terrorizes a small community high up in the mountains. A rag tag bunch of misfits including a big city cop recently relocated to the country, a big game hunter, a Jane Goodall wannabe hoping to capture the beast on film and an old grizzled hunter looking for revenge, set off into the wilderness to track down and kill the beast that has acquired a taste for human flesh.

Clocking in at just shy of two hours it takes a good half of the film to get to the above premise (and down to some satisfying mutant wild boar action) as Shin Jung-Won’s film takes its time to introduce characters and spare a good chunk of its running time on comedy pratfalls. Eschewing tension and ultra gory violence, ‘Chaw’ instead goes the comedy horror route much like, say, ‘Tremors’ or another Korean big hit monster movie, ‘The Host’. While it’s always good to keep things light when making a film about a giant, man eating boar, the comedy is perhaps laid on a bit thick and laboured to almost breaking point. A whole wealth of oddball characters fight for screen time, as the they fall over, shout, gurn and shout some more, as the village falls into chaos when its revealed a huge pig is killing its residents. Aside from a few nice nods to ‘Jaws’ (a community still wanting to carry on as normal, despite a killer animal slaying its members), ‘Chaw’ unfortunately takes its time to get going as broad comedy dominates proceedings, characters attempt to out gurn and out shout one another and there is even time for some karaoke and a talking dog (!).

It’s certainly a noble effort by the director to take time to set up his characters and he obviously wanted his film to be funny as well as scary but, and again unfortunately, too many of the characters come off as obnoxious and the viewer will often just be wanting to get to all the wild boar horror. However, once things do settle down and the band of misfits set off into the woods, ‘Chaw’ shifts into second gear and gets going with the boar chasing, killing and, well, just a bit more comedy. Shin Jung-Won switches into creature feature mode and delivers regular bouts of giant boar action. Well staged and featuring a pretty impressive creature (rendered with some equally impressive CGI) the film notches up a level in the fun department and becomes a rather good monster movie. The boar hunts our group of have-a-go heroes with ferocity as they try desperately to kill it, ‘Chaw’ delivering several exciting monster on the rampage set-pieces.

Nothing wrong with combining humour and horror but the balance has to be just right and perhaps a little more subtle than it is here. Now, a movie about a giant man killing boar should never be taken that seriously (and I’m pretty sure the few that have been made, have never asked such a thing of their audience) but ‘Chaw’ could have benefited from a little more tension/horror and a little less madcap comedy. Still, this slick Korean production offers a fair amount of rampaging animal attacks, goofy horror fun and dashings of gore to make it a decent monster movie.