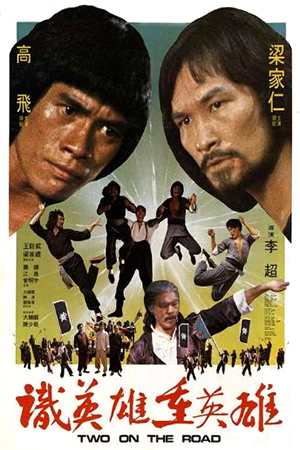 From independent maestros Goldig films comes a kung fu comedy that combines the talents of Leung Kar-Yan, Phillip Ko Fei and the ultimate villain Johnny Wang Lung-Wei. With such potential in front of the camera, it would be an impossibility to makes a feature that isn’t, at the very least, entertaining.

During the transportation of much needed gold to China’s famine regions, a band of robbers devise an ambush to plunder the goods. Among the carnage are two bewildered yet innocent conmen who meet by chance and soon find themselves in a far bigger plot. Although, strangely enough, the expected gold cargo is missing, the two are accused of masterminding the robbery and a considerable bounty is put on their heads. When they finally see that their constant bickering and double-crossing helps neither of them, the pair resolve to uncover the real brains behind the operation. During their haphazard investigation, they still manage to make even more enemies before they reveal the identity of the unknown antagonist.

The very best of the kung fu comedy sub-genre are well-balanced features that manage to tread the line between the two concepts flawlessly. Classics such as ‘Drunken Master’, ‘Knockabout’, ‘Magnificent Butcher’ and ‘Prodigal Son’ all rely on humour built on their characters and incidents that usually contribute something to the storyline. The main failing of lesser films is the imbalance between comedy and action, added to a lack of real context for the humour. This proves to be the weakness that afflicts ‘Two On The Road’. There are, without doubt, a few funny scenes, but the middle section is mercilessly with repetitive farce. The extent of this is apparent when the viewer suddenly realises how far the film has meandered from its storyline, therefore rendering ‘Two On The Road’ ineffectual in both departments.

All is not lost though as ‘Two On The Road’ does have a few notable aces up it’s sleeve. The pairing of Leung Kar-Yan and Phillip Ko Fei is surprisingly effective with both men playing their comic roles with a remarkable equilibrium between the subtle and the outrageous. The acting range of some of kung-fu cinema’s great stars was criminally underrated with many showing an admirable aptitude for comedy and gravitas. ‘Two On The Road’ major asset is undoubtedly its outstanding two-on-one battle that constitutes the film’s finale. It could be easy to forgive the awkwardness of the previous hour when the quality of the closing twenty minutes is so good. Each of the three performers in the masterful scene have rarely looked as impressive before or since and the choreography deserves commendation for this. Kung-Fu comedy has a handful of triumphs, many that are flawed entertainment and quite a few that are woeful. ‘Two On The Road’ is another good, but not great addition to the crowded field.