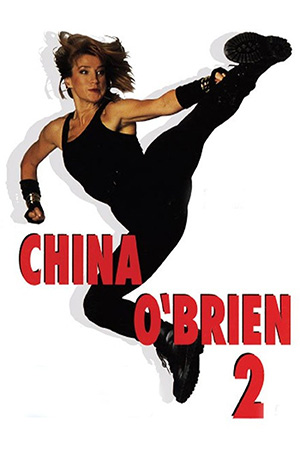 This cheapie, quickie sequel to the original ‘China O’Brien’ was shot almost immediately after the first with much of the same cast and crew and released within months of the original. It’s more of the same with O’Brien (Rothrock) now the sheriff of her home town with bad-ass deputy Dakota (Cooke) and bearded, denim loving, love hunk Matt (Norton) providing her back up. This time around O’Brien puts her high kicking skills to good use when nasty bad guy Baskin (Marks) and his squad of buffoons lay siege to her town after she thwarts their recent killing spree.

In between fighting some “comedy” rednecks, collecting awards for being the best sheriff the town has ever seen (!) and smooching Norton, Rothrock busts a fair amount of martial arts moves as she takes on the hilariously moustached bad guy and his never ending supply of rent-a-goons. Low budget, straight to the point and with a bevy of clear and crisp fight scenes, ‘China O’Brien 2’ is early 90s American martial arts action 101. Sure the lack of budget shows, the acting is often all over the place and there is a serious amount of denim on show but this welcome sequel is a load of unsophisticated action fun.

Just as entertaining as its predecessor (and if you weren’t particularly cock-a-hoop about that cheapie action blast, you ain’t gonna enjoy this one!), ‘China O’Brien 2’ is a brisk 80 minutes of small town US nonsense with a flurry of Hong Kong infused fight action. The fights come thick and fast and while not as intricate or as sustained as many of the Hong Kong fights Rothrock and Norton appeared in before this flick they are still energetic and pack a punch. Rothrock, Norton and Cooke are all gifted screen fighters and get to showcase mucho fight skills here, with Cooke practically stealing the film with impressive bootwork. The likes of Billy Blanks and Toshishiro Obata also pop up to cause trouble, the latter appearing in a rather surprising sequence brandishing Wolverine like claws! The three leads share an easy going chemistry which adds to the fun and come the last twenty minutes when the bad guys hold the whole town under siege the action ramps up and is a satisfyingly explosive finale.

It’s also great to have a female lead action series (pity it didn’t make it to a Part 3) and while flicks like this were a dime a dozen back in the heyday of video rental shops, ‘China O’Brien 2’ and its predecessor are still two of the most fun and action packed. While it’ll never scale the heights of its Hong Kong counterparts of the day, this fast and fun sequel still delivers the Rothock, Norton and Cooke action goods.