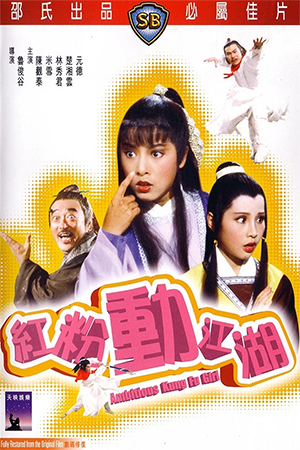 Spoilt and with her head permanently in the clouds, Yuen Si Si (Mei) – naive daughter of an affluent merchant – lives her cosseted life dreaming of a meeting with her idol Qin Ge (Chen Kwan-Tai). Qin Ge is a kung-fu celebrity somewhat out of reach though and Si Si’s wealthy father decides to marry her of to his friend’s son, Yang Fan (Tak). Obviously an arranged marriage is anathema to the fiercely independent young woman and she sneaks out of the house with the intention of finding her beloved Qin Ge. What she doesn’t realise though is that the kung-fu skills she thinks will protect her are merely a pretence, cleverly engineered to boost her ego by her over-protective father. It isn’t too long into her misadventure that the formerly hermitic Si Si discovers that the world outside is far from being the world of chivalry that she expected and there are people practically lining up to take advantage of her. Not too far behind her is Yang Fan who is keen to save his fiancée more for the reward offered by her father than any feelings of affection for her.

Borrowing from Sammo Hung’s lauded ‘Prodigal Son’, ‘Ambitious Kung-Fu Girl’ goes off in a very different direction to the Golden Harvest production, ultimately treading water in very familiar territory. Preferring to go down the ‘pedestrian kung-fu comedy’ route, this is a film that was very typical of what was released in the early 80s by the Shaw Brothers. There were still some great works produced at this time, but there were also as many that took a cast and crew full of talent then wasted them on very predictable material. ‘Ambitious Kung-Fu Girl’ is one such example and appears far too content with its rudderless narrative to mount any serious challenge to the title of best genre film.

As with so many of the aforementioned Shaw Brothers’ films, the predominantly latent talent adds to the frustrations as do the glimpses of imagination on the part of director Liu Jun-Guk. Lu occasionally offers some moments of delicious satire that dig underneath the surface of the genre. Si Si’s initial dreams of the martial world are expertly juxtaposed with the cut-throat reality with her encounter with a hero whose identity changes hands three times being a commendable conceit. We’re also treated to an effect swipe against celebrity and the deification they undergo; Qin Ge is shown as being quite different to the heroic figure that Si Si imagines him to be. Despite a craven attempt to turn him into a real hero at the last minute, such an intelligent parody is one of the more resonant features of the film.

‘Ambitious Kung-Fu Girl’ squanders these moments of satire as it becomes increasingly confused as to what it wants to be. The action choreography gets more ornate as the story moves on, but it never marries up with the humour generated by the situations. Considering this is a production from 1981, it seems that the sword-on-sword action is a little unimaginative and hardly implies that it was conceived in the monumental era in which it was. Even the fact that Si Si thinks she is invulnerable when she so patently isn’t is never explored beyond a cursory raised eyebrow.

While it’s always good to see Yuen Tak in a rare heroic role and Michelle Mei is a fine addition to the cast, this is only a minor entry in the Shaw Brothers’ canon and shows little of the ingenuity that Liu Jun-Guk has briefly revealed before. It is a diverting 90 minutes with a few well constructed scenes scattered throughout, but this hardly compensates for its waste of potential. ‘Ambitious Kung-Fu Girl’ benefits from the fact that I can’t award it 3 1/4 stars, a mark that would have been closer the truth.