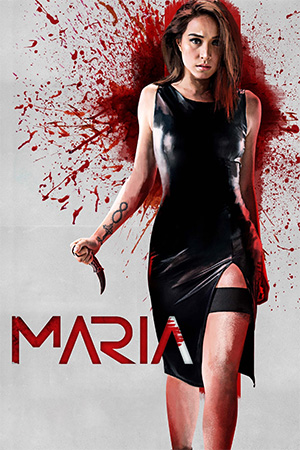 A B-movie with some bite, ‘Maria’ stumbles with its by-the-numbers story and unnecessary scenes of torture but is saved by some cool fight scenes and a fierce lead performance from Cristine Reyes. She plays the Maria of the title, a former cartel enforcer who manages to leave the life of killing behind and start afresh, complete with new husband and child. After many years of leading this normal life, her former employees discover she is not dead after all and, as retaliation, swiftly slay her new family. Broken but not beat, Maria takes up arms once again and goes gunning for her former comrades, unleashing bloody vengeance.

A set-up action movie fans have seen many, many times before but one that can still be entertaining if done right. While ‘Maria’ does have some good stuff in it, it’s unfortunately bogged down by needless supporting characters and, a pace that drags in between the action, and for the first half of the film: too many gratuitous torture scenes. It leaves a nasty taste in the mouth and is a disappointing development after the film starts promising, right out the gate with a cool action scene. Additionally, the bad guys never feel as threatening as they should (and always seem to be arguing with one another instead of ever actually doing anything, save for torturing!) and, as mentioned, the pace drags with what feels like too much plodding padding between the action scenes. However, Reyes shows convincing emotion at the loss of her child, setting her on a rage fuelled mission of revenge.

Speaking of Reyes, she ignites the film whenever on screen. Slicing through bad guys with aplomb, using a vicious karambit knife, she excels in the action and gets plenty of opportunity to strut her stuff. The action scenes, overseen by Sonny Sisson (‘BuyBust’), may not be of the sustained and intricate level of say ‘The Raid’ films but they deliver a satisfyingly brutal efficiency and are mercifully free of CGI or tricksy editing “enhancement”. There is also some nicely staged gunplay thrown in to mix up the action.

Frustratingly not quite the rollicking revenge flick it should be, ‘Maria’ nevertheless features some fierce female centric fighting, a great central performance from Cristine Reyes and will no doubt be enjoyed by the less critical martial arts movie fan.