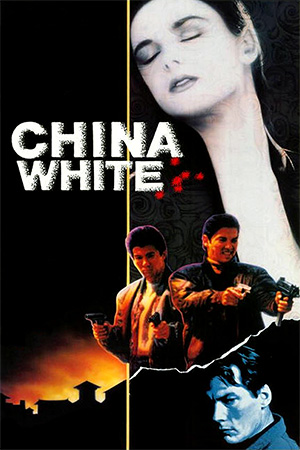 While most known these days for the likes of ‘The Bride with White Hair’, Jet Li’s ‘Fearless’ and his Hollywood horror hits ‘Bride of Chucky’ and ‘Freddy vs Jason’, director Ronny Yu helmed many a film before hitting it big with the above. These earlier films included a couple of hard hitting action thrillers: one being the Brandon lee starring ‘Legacy of Rage’ and the other being the international set and multinational cast ‘China White’. Filmed mainly in Amsterdam, with jaunts to Paris and Thailand, ‘China White’ is not as accomplished as Yu’s later films and hasn’t dated the best either but still remains an entertaining thriller with some hard hitting action scenes.

Bobby and Danny (Wong & Vincent Leigh) are brothers living in Amsterdam working for their Uncle Chi (Ku Feng), a local mob boss deep in the drug business. When Chi is slain by rival Mafia gang boss Scalia (Drago) the brothers decide to take control of the drug business, build an empire and seek revenge on Scalia. However, climbing to the top of the drug world and taking vengeance is never an easy thing when a pretty lady, in the form of undercover cop Anne (Schrage), almost derails the brother’s plan when she falls for Bobby. This gives Scalia the edge over the brothers who must then retaliate in over-the-top ballistic fashion.

‘China White’ isn’t bad. Not the greatest example of the heroic bloodshed genre or of action films coming out of Hong Kong at the time but a solid thriller that benefits from its diverse cast and excellent use of international locations. ‘Vanishing Son’ and ‘Romeo Must Die’ star Russell Wong gives a decent early performance as the charismatic Bobby, the more assured of the brothers and certainly convinces as a slick drug kingpin when he visits The Golden Triangle to barter business with a local warring general. Steven Vincent Leigh (‘Sword of Honour’, ‘To Be the Best’) shares good chemistry with Wong, the two of them convincing as brothers (who refreshingly get along for the most part instead partaking in cliché sibling rivalry dramatics), and even has a cool (albeit brief) fight with blonde amazon Saskia Van Rijswijk (‘Iron Angels 3’). Drago does his usual tripped out bad guy thing, Schrage is a tougher than usual love interest and the film is littered with various Hong Kong faces of the time.

Unfortunately, ‘China White’ takes too much of a divergence into the romance between Bobby and Anne, it clogging up to way too much of the running time. Their trip to Paris seems to go on forever, slowing down the drug empire/undercover cops/revenge seeking aspects of the story. Nothing wrong with a bit of romance but focus should have been kept on the brothers plotting their revenge rather than us viewers having to take in more of the pretty sights of Paris. Fortunately, Yu brings it all back together for a big heroic bloodshed shootout (and that aforementioned fight) leading to some impressively bloody squibbed action and a surprisingly downbeat ending. The film isn’t packed with action but does feature 3 big shootouts that while not having the finesse of say a John Woo gunplay sequence certainly pack a punch and one scene even features an incredibly dangerous and awesome looking stunt featuring a high fall with a ladder!

Overall, a decent late 80s Hong Kong action thriller from one of Hong Kong’s most underrated directors. This review refers to the European version release rather than the longer Hong Kong version.