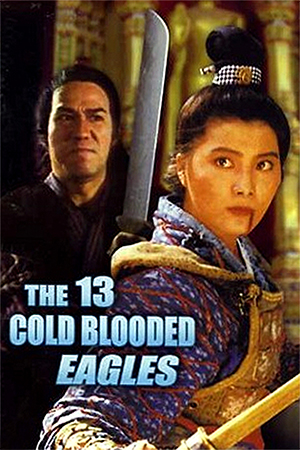 A diverting low-budget feature made during the 90’s new-wave kung-fu boom. The 13 cold-blooded eagles are a group of highly-skilled assassins who carry out the bidding of their mysterious leader who is known as the Foster Father. This brooding leader gives them the task of protecting the clan from the various enemies that infest the martial world and are intent on ruling it at their expense. One such mission sees the team sent out to recover the ‘Skills Book’ which features the ultimate secrets of martial arts and makes the recipient practically invincible. With the Eagles doing his bidding, the Foster Father gains the book and also uses his warriors to defeat the powerful Shin Shu monster who stands as a constant threat to him; now he rules the martial world. However, one of the Eagles realises that the Foster Father has evil intentions and will happily kill anyone who gets in his way including those of his own clan. After teaming up with a beautiful swordswoman (Khan), it is up to the warrior to stop his former benefactor and bring peace to the martial world.

This straight-forward storyline was later to be resurrected in the blockbuster film ‘The Storm Riders’ and like its big-budget counterpart, ‘The 13 Cold-Blooded Eagles’ is an entertaining production. Whereas ‘The Storm Riders’ utilised extensive CGI effects, ‘The 13 Cold-Blooded Eagles’ uses classical wire-fu with acrobatic, gravity defying swordplay the order of the day. These battles are really what make the film enjoyable and the inventiveness they display make up for the many weaknesses in the plot. Director Choy Fat has shown in the past that narratives are not his strong point and once again this is a convoluted and confusing affair. However, for those seeking a fast-paced fantasy film with no pretensions, ‘The 13 Cold-Blooded Eagles’ fits the bill very well and, while not comparable to genre classics like ‘Swordsman II’, is worth a look.