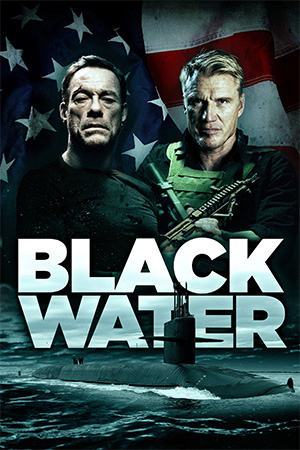 Unisols Van-Damme and Lundgren re-unite for this fun throwback to the kind of action flick 90s video stores were flooded with. Van-Damme is ace undercover operative Wheeler who is in the possession of a flash drive which contains some top secret, and potentially incriminating, info. And wouldn’t you know there are some shady government types who want to get their grubby hands on it. Ambushing Wheeler, they capture him after a tense fire-fight and imprison him aboard a black site submarine. Trapped in the bowls of the steel beast with a squad of tactically armed soldiers who aren’t above using torture to find out the location of the drive, Wheeler must use his wits, brawn and the help of an ally agent Cass (Waltz) to fight his way out of the deadly confines of the submarine.

‘Black Water’ (to this two-bit reviewer at least) was a pleasant surprise. Low budget, straight-forward, though with a couple of unexpected twists and turns, this was a fun and surprisingly action packed ride. More of a low budget spy thriller (albeit with a heavy dose of automatic gunfire action) than a martial arts film, Van-Damme fans may be disappointed he doesn’t engage in many fights but this was a nice change of pace for the Muscles from Brussels. Despite the limited budget (the submarine sets are often a little wobbly!) the makers have crafted a decent action thriller, which works well within its B-movie confines. Sure it takes itself a little too seriously (though, thankfully, Lundgren is on hand for some levity!) but the flick has a few surprises up its sleeve and decent performances from the familiar faced cast. The action is much more of the spraying-loads-of-bullets-and-hitting-nobody-variety (so yeah, very 90s action movie!) but it is well mounted and satisfyingly bloody squib-tastic (which again gives that 90s action B-movie vibe).

Unfortunately Lundgren is mainly sidelined until the last 30 minutes (meaning it’s not quite the ‘Universal Soldier’ reunion one may have hoped for) but he and Van Damme seem to be having fun together in their scenes. It’s not only a ‘Universal Soldier’ reunion but a ‘Death Warrant’ gathering also, as The Sandman himself, Patrick Kilpatrick, is on board to once again cause trouble for Van Damme. Sure, its lack of coin shows through now and again and there’s plenty of B-movie barminess on show, but ‘Black Water’ is a decent actioner and (along with ‘Enemies Closer’) one of Van-Damme’s more entertaining vehicles of late.