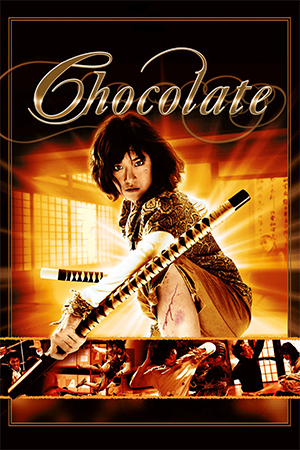 Despite the much-heralded emergence of Thai action cinema, the industry seems to have gone quiet of late and has rarely lived up to it’s initial expectations. Admittedly, we have seen the odd diamond in the rough (such as ‘Dynamite Warrior’) but nothing has managed to set the world alight the way that Tony Jaa did with ‘Ong Bak’. However, that could all be about to change as director Prachya Pinkaew is finally back and this time he’s bringing with him one hell of a kick ass femme fatale.

Zin is the girlfriend of Thai gangster No. 8 and will do anything she can to protect his interests. However, when she meets rival gangster Masashi the two fall hopelessly in love and become heavily involved. Their romance is not very pleasing to No. 8 who warns them that they must separate or he will have them both killed. Much to his disappointment, Masashi is forced to head back to Japan whilst Zin realises she is pregnant and gives birth to an autistic girl that she names Zen. As the girl grows up, she develops an uncanny ability in the martial arts by watching the kids at a local Thai kickboxing school and studying the moves on television. Now with her mother taken ill, Zen needs money to pay the bills and it looks like her skills may come in handy when she starts collecting debts owed from several gangster connections.

When it comes to action cinema, the combination of director Prachya Pinkaew and action choreographer Panna Rittikrai always seem to come up trumps. Never has this been truer than in the case of ‘Chocolate’; an absolutely sublime effort that is littered with bone crunching fight sequences and jaw dropping acrobatics that are benchmarks for the way martial arts movies should be handled. Newcomer Jeeja Yanin may not have the physical dexterity of Tony Jaa, but she is amazingly versatile and with the help of a few wires looks exceptionally realistic in each of her fights. I’d actually go so far as to compare her movements to Jackie Chan as she exhibits several similar combinations and is very adaptable to each fighting style. In short, she’s brilliant and quite why she hasn’t been lined up for any other films thus far is a mystery to behold.

Despite all this praise though, it’s a real shame that Pinkaew is still not quite as adept at handling actors and storyline as he is at dealing with action sequences. That isn’t to say ‘Chocolate’ is bad as it’s visually very impressive and definitely a step up from ‘Ong Bak’, but it still has a number of weaknesses. For example, the setup for the relatively simple plot seems inexcusably long and thanks to a very predictable outcome, provides very little pay-off for such a large time investment. On top of this, the actors have the tendency to overact rather than emote effectively so you often find yourself struggling to empathise at sequences that should be tugging at the heart strings. That said though, Janin does manage to carry the film quite effectively and it will be interesting to see how she handles something that requires her to stretch her acting skills a little further.

‘Chocolate’ is excellent action entertainment from start to finish, and fight fans will be delighted to see that Pinkaew and Rittikrai haven’t lost their touch. It is worth noting though that the film still suffers from the same issues (namely simple story and questionable acting) that plagued ‘Ong Bak’ and ‘Tom Yum Goong’ so it’s far from flawless. Who cares though, we will always need good action movies and as long as Pinkaew keeps making them like this, I’ll keep lining up to see them.