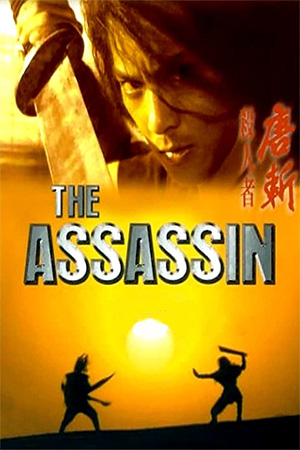 A  minor entry in the early nineties Hong Kong swordplay boom, ‘The Assassin’ is an efficient actioner that delivers the goods with brutal efficiency.  At a lean 78 minutes the film borders on inconsequential, but unlike other Hong Kong movies whose brief running time suggests heavy re-editing (‘The Three Swordsmen’, ‘The Dragon Chronicles’) ‘The Assassin’ seems to have been planned as a swift, bloody Boys’ Own adventure.

The postage stamp plot has Tong Po Ka (Zhang) ripped from his beloved Yiu (Kwan) in the opening scene and brutally tortured by the authorities before being pitted against psychopaths in a fight to the death.  Having survived this, Tong is recruited by the Eunuch Ngai as an assassin (and rechristened Tong Chop), charged with leading other lethal killers against the enemies of the Ming Dynasty.  When Tong rejects the Killer’s code for a life of agricultural bliss with Yiu and her new family, Ngai gives Wong Kau (Mok), a callow hitman who craves the top position, the opportunity to slay Tong and achieve his dream.

That (Cat III) violence is so prevalent is not surprising when looking at the production team.  Director Billy Chung is responsible for such slices of cinematic sadism as ‘Love to Kill’ and ‘Trust Me U Die’, while co-writer Roy Szeto had previously displayed a taste for the macabre in ‘We’re Going to Eat You’ and ‘A Chinese Ghost Story III’.  Co-action director Stephen Tung contributed to the woefully under seen ‘The Blade’, although he is not asked to be as ambitious here.

But, Chung seems to be looking beyond Hong Kong for his inspirations; the prison torture scenes recall the bloodcurdling Euro-period horrors of the 60s and 70s, there is a nod to gladiator films, and a thousand slasher movies are evoked when Eunuch Ngai stalks treacherous concubines through a maze of pillars, eviscerating them in turn.  Visually, he asks cinematographer Chiu (‘Raise the Red Lantern’) Fei to ape the red and blue palette ubiquitous in HK movies of the period, although the photography for the desert tavern climax actually prefigures Christopher Doyle’s “look” in ‘Ashes of Time’.

Zhang Feng-Yi’s presence lends respectability to the pulp for those who remember him from ‘Farewell My Concubine’ or the equally masterful ‘The Blue Kite’, and Rosamund Kwan, in a glorified cameo, lends the film some heart.  The boy-band pretty Mok Siu Chung is too cute to pose a serious threat to the masculine Zhang, and is only hindered by a wig recalling Cher’s 80s shaggy perm.

Like an ultra-violent episode of ‘Hercules’, ‘The Assassin’ is enjoyable while it lasts. Evidence suggests it was not intended to be anything more.