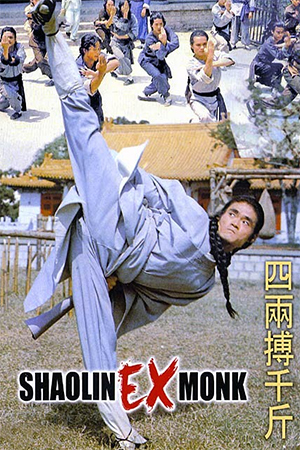 Happy-Go-Lucky orphan Chow (Ko) has only two loves in life: the first one is Tin, the beautiful daughter of one of the town’s most influential men; the second is kung fu, or rather his desire to find a master that will teach him it. His first love leads to a confrontation that helps him with his second as Tin’s father sends his minions out to beat Chow and a mysterious kung fu expert comes to his defence. After being rescued from the lynch mob, Chow begs the stranger (Liu) to teach him kung fu, a request that is eventually accepted. However, while the training continues, the local inhabitants are rocked by a series of murders that leave few clues and even fewer suspects. Chow and his new master decide to investigate, but are unable to uncover any new information and are left to wait for the murderer’s next move. Unfortunately the murderer’s next action is to kill Tin’s father and further distress not only the locals, but also the woman Chow loves. Although the young student was far from friendly with Tin’s father, he resolves to find the killer and solve the mystery that has baffled the town authorities.

A fast-moving, superior mixture of just about every sub-genre going, ‘Shaolin Ex-Monk’ is an excellent example of an independent film that sets out its stall early on and doesn’t disappoint. Too many independent kung fu films concentrate their energies on copying the comic antics of Jackie Chan – though without the charm – or the extensive training sequences of ’36th Chamber Of Shaolin’, only to get bogged down in mediocrity. ‘Shaolin Ex-Monk’ refuses to concentrate all of its energies on just one aspect and it is probably this consistency that really works in the film’s favour; it’s not only a straight kung fu film, but also a murder mystery and, at times, a comedy. By using each portion of this sparingly, director Cheung San Yi ensures that there are rarely moments that lack interest or that fail ton involve the viewer. If there is one aspect of the film that does seem awkward it is the unnecessary use of tricks to enhance some of the fight action. Some very obvious wirework (including the very visible wires!) are at odds with the quality of the rest of the film. These gimmicks are really not needed when seasoned performers like John Liu and Jack Long are in the cast; Liu lights up the screen with his explosive bootwork while Jack Long and the endearing Blacky Ko provide extra physical presence. ‘Shaolin Ex-Monk’ is a tight, fight-filled independent film with a polished feel that lifts it above the average genre flick.