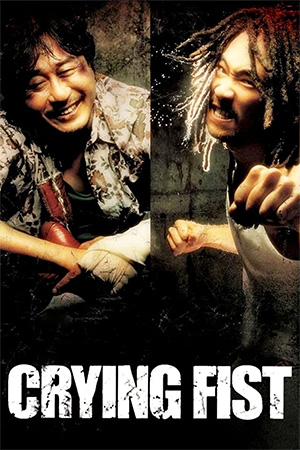 The Korean filmmakers of such hits as ‘No Blood No Tears’, ‘Arahan’ and ‘City of Violence’ turn their considerable skills to the boxing movie. ‘Crying Fist’ features much of the trademark rough and tumble fights scenes of Ryoo Seung-Wan’s other films but is more of a drama about two losers in life finding redemption through a sport that helps them to become the people they need to be. While a little too contrived in some instances, to get the sympathy flowing, ‘Crying Fist’ is no ‘Rocky’ retread and actually tells two parallel stories that eventually converge and thankfully avoids the old dog teaching the new dog how to become a better fighter routine.

However, the film is still about the underdog: two of life’s underachiever’s overcoming the odds stacked against them to triumph in the boxing ring. This is a sports movie at heart and we have to have an underdog to cheer on. Here, we get two. The first is Tae-Shik (Choi Min-Sik) a one time medal winning boxer who has fallen on hard times, mainly due to his bull headed pride that has lost him his family, money and respect as a fighter. The other is Sang-Hwan (Ryoo Seung-Bum) a young delinquent with no focus who ends up in a correctional facility where, after the usual missteps of getting into fights with other inmates etc, finds a way of focusing his aggression through boxing. These two, despite life always conspiring against them and the consequences of their own ineptitude, work hard to become better boxers and eventually compete in an amateur competition where they fight for the respect and acceptance of their families.

This good-looking Korean production is buoyed by two committed central performances. Choi Min-sik (‘Oldboy’) and Ryoo Seung-Bum (‘Arahan’) are both equally outstanding as the old and young losers, two characters who at first don’t imbue us viewers with much sympathy. Both Tae-Shik and Sang-Hwan are selfish and self absorbed people who do themselves no favours. But over the course of their stories they change and develop (though never becoming truly great human beings) to become better people. Life has not been fair to them and no matter what they do it always seems to be against them. But the two, despite their over inflated sense of their own self importance, soon learn to stop fighting themselves and everyone around them and apply all their energy in the ring. Choi Min-Sik has always been a gifted actor (from ‘The Quiet Family’ to ‘Oldboy’ to ‘Lady Vengeance’) and once again shows his commitment to totally emerging himself in the role. Likewise, Ryoo Seung-Bum is just as good and with his performance here and in other flicks such as ‘Arahan’ and ‘No Blood No Tears’ shows he is one of the most talented young actors working in Korean cinema today. Both must have had to do considerable training in boxing as well and it shows in their fights scenes.

The narrative may be a little heavy on the down and out aspects of life, never letting the characters take the easy route. This certainly gives the film a more gritty feel, despite the polished look, and while its maybe laid on a bit thick the story is punctuated with frequent bouts of frenetic fighting and an upbeat final third. The fight scenes and boxing matches are executed with breathless energy and are never overly choreographed giving them a more authentic feel. Now showy gimmicks or flashy camera and editing tricks, just two guys going fist to fist until they can hardly stand anymore. The final third of the film does lay on the plot contrivances, everything working out ok (well mostly ok) but its hard not too feel happy for the characters and especially their families after all they have been through. Plus, a sports movie has to have a happy ending (and what’s wrong with a happy in ending anyway?) much like it has to have a training montage. Which ‘Crying Fist’ also has.

A novel approach to a subject and themes that have been covered many times before in films, ‘Crying Fist’ feels fresh and exciting thanks to the considerable skills of its director, the novel use of two storylines happening at the same time and the excellent performances of the leads. Despite a premise and trailer that made it look like it was just covering well worn ground, ‘Crying Fist’ proves itself to be a true contender in the world of impressive Korean cinema.