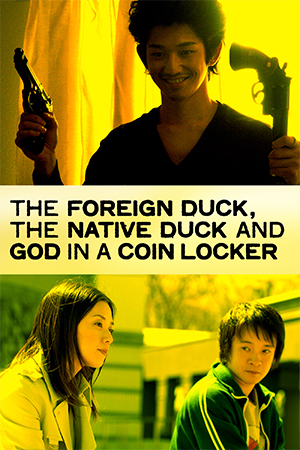 Into the university city of Sendai arrives student Shiina (Hamada) who moves into a small apartment and tries to befriend his awkward neighbours. Shiina finds a friend through love of a particular Bob Dylan song, though this new acquaintance, Kawasaki (Eita), is very different to the shy student. Cool, though decidedly odd Kawasaki involves Shiina in a bizarre attempt to steal a Japanese dictionary for his Bhutanese neighbour by robbing a local bookstore. This is just the beginning of the strange occurrences and characters that the newcomer faces as he becomes embroiled in Kawasaki’s world.

Due to the length of the film’s title, you would be forgiven for thinking that ‘The Foreign Duck, The Native Duck and God in a Coin Locker’ lets the cat out of the bag regarding the actual narrative of this Japanese comedy. Yet, as with so many resolutely nutty Nipponese offerings, it’s difficult to telegraph any of the zany twists that director Yoshihiro Nakamura has in store for viewers.

‘The Foreign Duck…’ belongs to that sub-genre of semi-absurdist slacker comedies unique to Japan. The problem is that, after forty languid minutes where not much happens save for gratingly ‘quirky’ comedy moments, it seems that this is another film that is happy just to throw in parochial references rather than give the humour any context to work within. The characters are nothing more than straight-faced clowns without any real jokes to get their teeth into. And then something incredible happens…

As it begins to appear that this will be another unfunny Japanese comedy where kookiness is more valued than originality or wit, the film changes direction and goes some way to redeeming itself. All of a sudden – thanks to a surprising twist – all of the little moments that occurred without rhyme or reason begin to make sense and the story discovers its soul. The characters have humanity breathed into them as drama takes the place of the comedy that dominated the first half of the film. ‘The Foreign Duck…’ is the perfect example of why it is so important to drag yourself to the end of a film no matter what. My mediocre talents as a reviewer mean I have an extra incentive not to reach for the remote control and my reward is stumbling upon something like ‘The Foreign Duck…’ once in a while. By all means show the same patience because as frustrating as it begins, Yoshihiro Nakamura’s film finishes with aplomb.