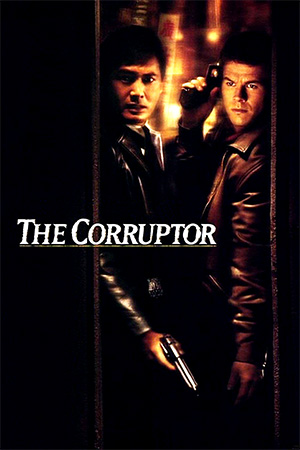 Chow Yun-Fat’s first attempt at the American market, ‘The Replacement Killers’, was a real disappointment for fans. Despite the abundance of action, it just seemed to be trying to mimic the style of the films that made Yun-Fat famous.  Thankfully, ‘The Corruptor’ concentrates more on the film itself rather than working around an image for one of its stars.

Detective Nick Chen (CYF) is something of a celebrity in Chinatown, New York.  He has busted quite a few cases in his time and received commendations for his efforts.  The main problem for him in this part of town is the ongoing war between the two biggest Triad groups, the Tongs and the Fukienese Dragons, and Chen is firmly involved in trying to stop the two.  When he is assigned Daniel Wallace (Wahlberg), a white cop placed into his Asian task force, he is obviously more than a little annoyed.  Wallace’s lack of experience is evident in their first gunfight so Chen takes it upon himself to show this rookie the ropes.  In the meantime, the young and ruthless leader of the Fukienese is leaving a bloody trail of dead bodies behind him and the Tongs are looking for revenge.  Maybe if they adopt some assistance from a few friendly police officers they can use it to their advantage.  The question is, who is the corruptor and who is the corrupted?

First and foremost, it’s important to note that ‘The Corruptor’ is definitely more of a thriller than an action movie. Although you still get to see shoot out or two, the film is primarily a gritty cops ‘n’ robbers tale that is actually pretty well handled.  James Foley opts for a back-to-basics approach to the genre, with less emphasis on flash and a bit more of an old school ‘French Connection’ type vibe. There’s also no sign of any slow motion or bullet ballet, and the few camera effects that are utilised, such as following the actors during combat, are definitely more of a help than a hindrance.

The acting is also suitably pleasing, with Yun-Fat making for a fine veteran Police officer while Wahlberg also works well as the new kid on the block. Wahlberg is still fairly new to the game but his role here isn’t far removed from what he has done before. Some of his dialogue delivery is perhaps a little tame, but on the whole you can’t really say he does anything wrong. Of course, Yun-Fat was definitely the major draw for me and I’m pleased to say he doesn’t disappoint.  It has to be said that Chow has been far from his best lately and you might even say he is starting to show his age. Thankfully though, he seems to buck that trend here and he is back to his suave and sophisticated self. He also gets to cut loose with an abundance of attitude and even draws on some of his comedic roots to keep it fun.

As is to be expected, ‘The Corruptor’ is not completely faultless. By far the most irritating element is the fact that all of the Chinese characters have some sort of serious flaws in their ethics.  They are either all out criminals, a bit on the dodgy side or entering the country illegally, which doesn’t exactly do wonders for the Asian stereotyping.  Another noticeable niggle is the use of so-called Chinese customs. While it’s fair to say a lot of them exist, they are explained terribly and there are some real clangers in the cheesy dialogue department, particularly when it comes from the rather weedy sounding Wahlberg.  Lastly, but by no means least, is the inclusion of a rap based soundtrack.  I have no idea what the connection is between rap and Asian-inspired American movies, but once again it is horribly integrated here and feels totally out of place.

‘The Corruptor’ makes for an enjoyable ride that is far superior to Chow’s previous introduction to an international audience.  This is mainly due to an above average script with some nice twists, as well as the use of Chow’s acting talents rather than his gun toting ability.  It’s not as action packed or as dramatic as some of his HK films but I would highly recommend it to anyone in the mood for a good thriller.