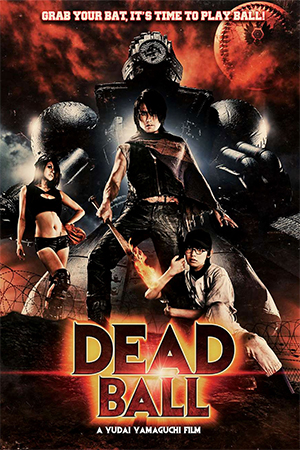 The crazy Japanese splatter punk trend continues with Yudai Yamaguchi’s ‘Deadball’, adding baseball into the mix of over-the-top gore, close to the bone “comedy” and just outright silliness. ‘Deadball’ sees one time ‘Versus’ star Tak Sakaguchi as a too cool for school hero (what else would he play?) who complete with Man With No Name Garb and boy band hair is an ultra badass at baseball. So badass in fact, he kills his own father and as he grows up goes on a vigilante rampage, killing those who deserve it and, well, being a general badass. He is eventually caught by the cops and sent to a weird (make that, very weird) prison run by (what else) psycho transvestite (at least I think they were!) wardens who spend a good chunk of the film trying to persuade him to play for their prison baseball team. Eventually, after much time wasting and several scenes of bad taste shenanigans (including vomit eating!!!), he agrees and the second half of the film features Tak and his team-mates taking on the Saint Black Dahlias (an all hot girl baseball team: sweet!) in quite possibly the most inappropriate and logic defying game of baseball ever to grace the screen. Well, at least since Yamaguchi’s previous insane-o baseball flick, ‘Battlefield Baseball’.

Unless you’re really, really, really into the genre then ‘Deadball’ doesn’t bring much new to the plate and isn’t anything you haven’t seen a million times before in the likes of better and slicker splatter gore flicks ‘Machine Girl’, ‘Tokyo Gore Police’ and ‘Robogeisha’. This entry is as cheap as chips and it shows in all the sub par CGI effects and spurting blood geysers, which are so naff they don’t even really raise a smile. Considering this is from the writer of ‘Versus’ and features that film’s ultra cool star, it’s disappointing ‘Deadball’ isn’t a lot more cooler than it is. There is plenty of bad taste comedy, including graphic rectal exams (!!!), explosive nose bleeds and baseballs getting lodged in eye sockets but it’s all just a little stale and, well, not that funny. Tak Sakaguchi, who was a fighting badass in the likes of ‘Versus’ and ‘Death Trance’, barely fights at all here, though I guess the intention is more of a gross out comedy than an ultra slick action film. He does however get the best running gag of the film in that he always manages to pull a lit cigarette out of thin air to puff on when he is trying to be all cool. It’s pretty funny, especially when the other characters acknowledge it as a WTF moment.

While there is a fair amount of bad taste and gross out nonsense on display, ‘Deadball’ feels a lot tamer than some of its counterparts and the effects (by the genre’s go to make up effects guy, Yoshihiro Nishimura), while occasionally effective, aren’t the best these type of flicks often display and unfortunately tend to rely on some god awful CGI. The manic energy of some of the aforementioned gore films is also absent meaning proceeding tend to drag which is a shame as the flick is never as over-the-top as it thinks it is. Still, there is enough goofy humour and goings one to make the running time bearable, those who absolutely love this genre will no doubt get a chuckle out of it and there is unlikely to be a more insane baseball themed movie released in the near future: unless the makers of this flick decide to make a sequel! Not a total strike out but could have been a whole lot more fun, and funnier, with a little more energy injected into it.