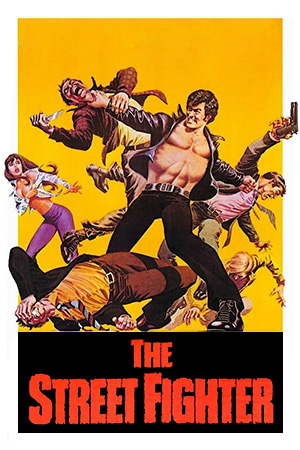 Wow, Sonny Chiba sure knew how to push the limits of on-screen violence back in the day. While it may be tame by today’s standards, ‘The Street Fighter’ is a throat ripping, eyeball gouging hoot that what it lacks in any kind of decency or coherent plotting makes up for with spades and spades of exploitation. Playing perhaps one of the most morally bi-polar heroes to grace the screen (one minute he’s selling a girl into the sex trade for not paying him the money she owes him, the next minute he rescuing another women from a similar fate) Sonny Chiba is Takuma Tsurugi, one bad ass dude you snaps legs and necks like they were twigs.

Takuma is a no nonsense mercenary who is asked by the Mafia and Yakuza to kidnap the daughter of a recently deceased oil magnate. When he refuses, mainly down to the fact they won’t meet his extortionate price, he switches sides and offers to protect the daughter (yep, not morally ambiguous at all!). However, the Mafia and Yakuza are having none of this, kidnap the daughter anyway and send legions of disposable bad guys to kill Takuma. He’s not going to let that happen and what follows is almost ninety minutes of absurdity, ultra violence and Chiba gurning like a mad man.

Now despite the flick looking pretty good in its new digitally re-mastered form and glorious widescreen, no one would ever mistake ‘The Street Fighter’ for being a great film. Tarantino might argue the point and while Chiba can be a great on-screen presence, ‘The Street Fighter’ is so inept on so many levels. But that is precisely the reason it is so good. Amping the exploitation factor up ten fold and playing everything with a straight face ‘The Street Fighter’ has everything the lover of bad cinema needs: oodles of gore, campness and ridiculous dialogue.

Perhaps the most memorable aspect is the ultra gory fight scenes. Blood explodes out of bodies everywhere and bad guys have their throats, eyes and even genitals ripped off by Chiba’s raging fighter. On top of this there are bonkers scenes of the hero and his poor put upon sidekick somehow escaping a very dangerous and fatal looking car stunt, simply by Chiba breathing heavy and blowing his cheeks out! Then there is all the misogyny, questionable morals of the hero and plenty more insaneness. So yeah, exploitation at its finest.

To be fair, ‘The Street Fighter’ does have a mean, nasty streak that gives it some bite and while the fights don’t always convince in their execution they certainly do with their brutality and unrelenting quest to hurt as many people as possible. The final showdown set aboard an oil tanker at night is a well sustained and excessively violent denouncement. ‘The Street Fighter’ was a break through film for Chiba and apparently the first film to receive the old ‘X’ certificate for violence. which gave it some more notoriety. While there is certainly better trash films out there, ‘The Street Fighter’ gets an extra star for delivering the exploitation goods and being a good laugh even when it probably wasn’t supposed to be. Followed by the equally nutty ‘Return of the Street Fighter’ and ‘The Street Fighter’s Last Revenge’.