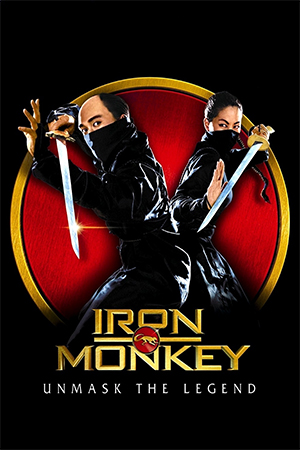 This is essentially a prequel to the ‘Once Upon A Time In China’ Series predominantly directed by Tsui Hark chronicling the legendary exploits of Wong Fei Hung. In ‘Iron Monkey’ it is Hung’s father Wong Kei Ying who gets more of the focus with Angie Tsang (a young, talented girl!) playing the youthful Wong Fei Hung.

Essentially a revamped version of the British Robin Hood legend as we see a local doctor (Yu Rong Guang) become the Iron Monkey at night in order to steal from the rich and give to the poor. That is until Wong Kei Ying comes into the village and is immediately rounded up with anyone else who looks, moves or sounds like a monkey or who has good fighting skills in order for the law enforcement to force a confession from anyone. As a result of Kei Ying’s awesome kung-fu ability, the authorities hold Fei Hung, forcing Wong to find and arrest the Iron Monkey so his son can be released. What follows is a series of classic kung fu fighting sequences similar in style to Jet Li’s ‘Tai Chi Master’, only better and more of them.

Angie Tsang is a revelation, displaying some fantastic ability and martial arts techniques as Wong Fei Hung, made even more remarkable when you know it is a girl no older than 12! It is a shame that she has not been used in a movie before or since, and very little information is known about her. Donnie Yen can also be seen in his best fighting performances of the nineties, far superior to his own directorial efforts ‘Legend of the Wolf’ and ‘Ballistic Kiss’.

Anyone who appreciates quality choreography, well executed fight sequences and a well told story will love this and will definitely want to own it! If you live in Europe then the newly released Hong Kong Legends DVD is a must have featuring an amazing anamorphic widescreen picture along with interviews with Donnie Yen and Yuen Woo Ping.  If not then the Hong Kong Mega Star release is almost as good and definitely worth purchasing.