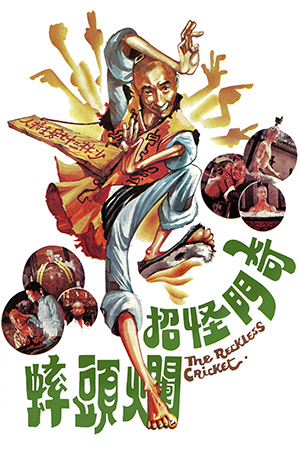 If you watch 70s Hong Kong cinema – especially kung fu films – you will know Hon Kwok-Choi. Perhaps the name might not leap out, but his goofy looks and nebbish personality in just about every film he’s in will stand out to you like a sore thumb. A kind of martial arts cinema Eddie Deezen, Hon was rarely given the chance to take centre stage though in 1979 he got his big chance under the Shaw Brothers banner with ‘The Reckless Cricket’.

The eponymous Cricket (Hon) is a bullied and put upon nobody whose only dream is to learn kung fu and fight back against those who oppress him. Not blessed with talent or intelligence, Cricket is at least blessed with a long-suffering girlfriend who is willing to finance his quixotic pursuit. Unfortunately, not every master and practitioner is honest and Cricket bounces from one charlatan to another, before completely wasting his funds.

It was a struggle to write a cohesive synopsis for ‘The Reckless Cricket’ because, even in a genre that often sacrifices storyline for action, this is especially sparse. Episodic and pantomimic, this is a series of not especially interesting scenes sewn together with a completely uninvolving main narrative: Cricket goes to a new master, gets conned, gets beaten up…and repeat. This means that even at a modest ninety minutes, ‘The Reckless Cricket’ is a tough watch and will have most people looking at the running time throughout.

When the word ‘action’ was used earlier, it should be noted that in ‘The Reckless Cricket’ this is a synonym for comedy rather than fisticuffs. And I use the term ‘comedy’ quite loosely as it’s hard to imagine even the most easily amused finding Hon’s antics hilarious. What’s remarkable is that Hon Kwok-Choi was known as one of the most talented acrobats in the Shaw Brothers studio so the concept of him serving up a reasonable kung fu comedy is not as ridiculous as it stands. Yet every time there is a danger that some action might break out – and there are a few moments of middling promise – director Kuei Chih-Hung undercranks it so that it looks utterly ridiculous.

‘The Reckless Cricket’ will probably be best enjoyed by Shaw Brothers completists or Hon Kwok-Choi fans. I have a strong feeling that the former greatly outrank the latter.