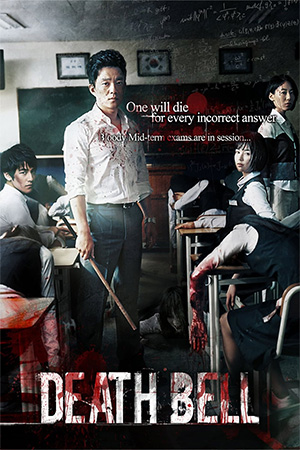 The students at an elite high school are frantically preparing for mid-term exams. As if this wasn’t bad enough already, they suddenly find themselves held captive and forced into a series of sadistic games where they are picked off one by one and held in impenetrable traps. They must now rely on the amazing intellects of their classmates to solve a series of questions, otherwise one of their number will meet a torturous, grizzly death. When it emerges that the students are being picked off according to a pattern, Kang Yi-na understands exactly how much time she has to stay alive and figure out the mysteries of who is imprisoning them…

‘Death Bell’ starts out like a lot of South Korean horror movies, with a handful of stressed school kids competing for the highest grades. After a fairly slow intro that dishes out the usual helping of girly bonds and backstabbing bitchiness, the film hooks you in by placing several of the kids into gruesome death traps. Although the idea may be a familiar one, the film boasts some impressively claustrophobic camerawork and cleverly devised predicaments that all help to ramp up the tension. It also sensibly chooses to maintain a distinctly Asian flavour by throwing in a mysterious ghostly figure that keeps you guessing about who or what is responsible right up till the end.

Unfortunately though, it isn’t all picture perfect as there are still a number of issues that stop ‘Death Bell’ from being top of the class. The script, co-written by director Chang, is clichéd to say the least, with the standard genre conventions forcing you to let out a couple of groans at various intervals. It also lacks any kind of distinctive character definition, so we seemingly neither care nor cringe when one of the kids bites the dust. As for the film’s big twist ending, it isn’t the worst idea imaginable but it is sloppily handled, meaning a lot of the film’s momentum is lost and it just seems to fizzle out.

‘Death Bell’ is certainly not the best the genre has to offer, but it is a harmless little frightfest that has a few hints of ‘Saw’ and ‘Battle Royale’ thrown in. If either of those outings appealed to you, then it’s likely you’ll find something to enjoy here.