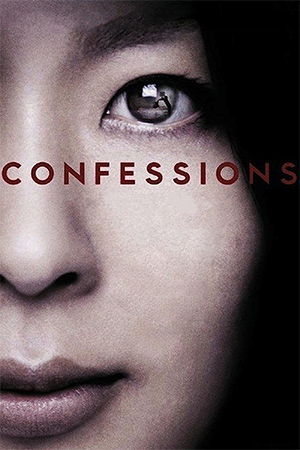 Wherever you are on or after the 18th February, make sure you get to the nearest art house cinema (if you’re blessed with one nearby) and watch the U.K. release of ‘Confessions’. Japanese cinema gives us at least one unquestioned masterpiece a year – there was ‘Departures’ in 2008 and ‘Nobody To Watch Over Me’ in 2009 – and 2010 is gifted Tetsuya Nakashima’s hotly-anticipated thriller which Western audiences will soon be able to savour on the big screen.

A stoic Japanese schoolteacher stands in front of her class and bids them farewell after a troubled year. The apathetic students listen with mild disdain as she explains her reasons for leaving and her general disillusionment with the country’s children. She discusses the terrible bereavement she suffered when her young daughter died and the stark depression that has clouded her mind ever since. But the mocking audience is about to discover that the death was no accident and two of the pupils sitting in the class may have been responsible. And she will have her revenge.

Many films have tackled infant mortality and its effects on shell-shocked parents – it is a nightmarish subject that only the most skilled directors are able to convey with the appropriate gravitas. In the first ten minutes of ‘Confessions’, Takako Matsu delivers an extended speech to a captive audience that must rank as one of greatest evocations of this theme. For a film to grip the viewer so completely within the first ten minutes, for an actress to give a performance so complete within the same time and for the dialogue to cut unflinchingly into the very heart of the matter so early on is the sign that something very special is about to unfold. ’Confessions’ is really that special.

The natural fear for the viewer after being treated to such an intense opening is that the subsequent film will hurtle downhill, unable to maintain the same quality. The fact that the same exceptional heights are hit thereafter that powerful introduction is testament to how good ‘Confessions’ really is. The brief synopsis above can only hint at the remarkable turns and twists that Nakashima unleashes on the viewer, cranking up the tension unbearably tight. It proves to be much more than just a story of revenge; it is a tragedy about apathy and how a lack of basic compassion is the greatest sorrow there is.

‘Confessions’ balances between cold hard reality and a subtly dream-like atmosphere that convinces the viewer that there isn’t a world outside of this horror. Nakashima showed his love of the surreal with ‘Kamikaze Girls’, turning a story of friendship into a vibrantly-coloured, relentlessly perky journey through a bizarre version of Tokyo. ‘Confessions’ is significantly less cheery, much less visually variegated, yet undeniably has the director’s unusual stamp all over it. Having built up to this career zenith, it’s hard to think how he can improve on this next time.

Japanese cinema has a rich pedigree the envy of most of the film-making world. Kurosawa, Ozu, Mizoguchi, Ichikawa and a select few others have rightfully etched their names into the very fabric of cinema  – ‘Confessions’ is Tetsuya Nakashima’s entry pass into this very exclusive club.